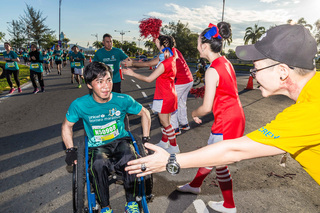 For more than a century the word ‘Borneo’ has evoked visions of a faraway land of wilderness and exotic cultures. The world’s third largest island, shared among three countries, has lost none of that appeal.

Sabah, on the Malaysian side of the island, offers a concentrated natural charm varying from old rainforests to the mysterious underwater world. It is the ideal destination for every enthusiastic runner-traveller.

Sabah’s Borneo Marathon is a relatively small race of 11,000 participants organised by a group of volunteers. It offers three distances: 42.2km, 21.1km and 10km – this last accounting for the majority of entrants. It was started in 2007 with only 529 runners in a place where road running was an alien concept.

Sabah lies in the tropics and has a hot and humid climate not well suited to record-breaking. But the race caught the attention of the Japanese World Championships runner Azusa Nojiri who has won twice. It has also provided the opportunity for home-grown stars to make their names on the international trail running scene such as Daved Simpat and Wincenbert Latius.

To avoid the worst of the heat the marathon flags off at 03:00 and the half marathon at 05.00 with the 10km following an hour later. Well-trained participants finish by daybreak with the sun rising on their backs as they run the final 200m inside the stadium.

The course was designed to feature the old and new of Sabah’s capital Kota Kinabalu. It traces the original town boundary before land reclamation was carried out after independence. The second half of the course includes an elevation inside the local campus and the tall government buildings overlooking the bay.

Cultural cheerleaders line the route – a welcome distraction from the warm temperatures and catering to the mid- to back-of-the-pack runners. Finishers get medals and race t-shirts featuring Sabah ethnic designs.

Borneo Marathon is a much-loved community event with over 1000 volunteers who are members of local charitable bodies. Since 2008 runners in the Borneo Marathon have raised a total of USD 450,000 for 25 charitable organisations. The event partnered with UNICEF from 2016–2019 and conducted relevant campaigns through the event for inclusivity, anti-bullying and healthy eating. Special 3km events were held for about 500 UNICEF-backed participants during the three years.

The event has benefitted local brands that supply the hydration, pre- and post-event meals and nutrition, venues, physiotherapists and sports photographers, as well as local hotels and eateries both large and small that welcome the out-of-town and international participants and their supporters.

The Borneo Half Marathon was introduced this year in February and was held four months before the main event. It featured a new half marathon course heading south to the famous Tanjung Aru beach. The organisers hope to showcase more of Kota Kinabalu through running events.

Borneo Marathon was recognised as one of the World’s 50 Best Running Races by Runner’s World magazine in 2018. The event attracts local and international runners from over 50 nations.