Back in the 1970s a pathologist from California, Thomas Bassler, suggested that any properly-trained marathon runner would not die from heart attack during a race. Decades have passed and we now know this is not true… 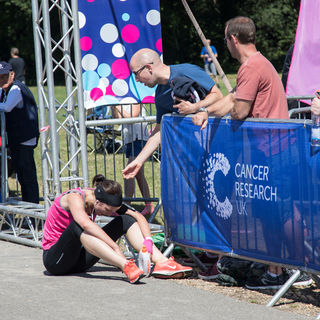 Southampton, Uk - 2 July 2017: Young athlete, suffering from heat exhaustion, is help by bystanders at the finish line of Race for Life. This annual race is run by women to raise money for Cancer Research.
© Jane Rix

Cardiac arrest and sudden cardiac death during marathon races have become well documented. They are not common, occurring about once in every 50,000–100,000 marathon finishes, and are usually due to cardiac problems either known or unknown to the runner.

Deaths are decreasing due to the use of automatic external defibrillators (AEDs) that are easy to carry and apply. Some road races have achieved an 80% survival rate through a rapid response, cardiopulmonary resuscitation (CPR), and immediate transport to an emergency cardiac care centre.

Based on the combined Marine Corps Marathon and Twin Cities Marathon database the risk of sudden cardiac arrest is about six times greater in men than in women and arrests occur mainly in men over 40 years old. Although most cardiac arrests happen at or near the finish line they have been documented along the entire length of the marathon course.

Cardiac arrests at shorter-distance races are even less common. In a large registry of American road race participants (RACER) they occurred at a rate of less than 3 per million half-marathon finishers. At the Twin Cities 10-mile race there have been 3 cardiac arrests in about 140,000 finishers since 2001 (2 per 100,000) – and all have survived. In a recent study of nineteen 10km road races held in the Boston area between 2011–2017, only one runner in nearly 100,000 finishers suffered a cardiac arrest – and this runner also survived.

This speaks to the critical nature of rapid response, access to an AED and on-site presence of trained first responders. It is very likely that the first responder to a collapsed runner will be a fellow runner. Every runner should be trained in basic CPR and should be prepared to assist if needed during a race or training run. This great service to the affected runner and to the race can easily be rewarded. For example, at Twin Cities in Motion runners who help in critical situations are given complimentary registration to the next year’s race.

The cardiac event rates for runners during training is not so well defined. We do not have good data on the number of runners who experience a cardiac arrest during training and die on the streets or trails. In 1984 Jim Fixx, who was instrumental in launching the popular running movement, suffered a cardiac arrest and died during a training run. He started running to reverse his unhealthy lifestyle and improve his cardiac risk profile. His death would likely have gone unnoticed had he not attained celebrity status through his writing about the health benefits of running.

In 1981 Paul Thompson MD, PhD looked at deaths amongst joggers in Rhode Island. He estimated the death rate at 1 per 7500 runners each year, which is considered low risk. Based on this data and the data from road racing, preparticipation screening is not recommended for healthy runners without symptoms or risk factors. But if you do have symptoms, a family history of heart disease or other risk factors (diabetes, high cholesterol, high blood pressure or smoking) you should consult your doctor before start to run or increasing your training.

If you have any of the risk factors mentioned above or you answer “yes” to any of the following questions you should get an evaluation by your primary care physician.

Heart health questions about you and your family: