He did it – but what exactly was it? 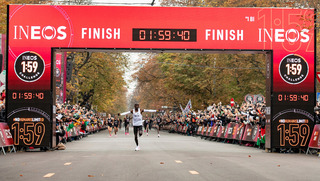 On 12 October Eliud Kipchoge propelled himself over a distance of 42,195 metres in less than two hours. It was the second time that he, along with scores of supporting personnel, had applied himself to this task.

First time around, in May 2018, it was a Nike-sponsored “Sub-2” [hours] attempt made on the racetrack at Monza which fell short of the target time by 25 seconds. Kipchoge nonetheless stunned many informed observers by how close he got to it.

So it was not too surprising that there was a second attempt, as long as the man himself was up for it. INEOS is a company that has promoted itself through performance – particularly in endurance sport – and they were the driving force behind this second attempt.

They took over from Sky in the sponsorship of the eponymous cycle team which has in recent years enjoyed great success in the Tour de France. The back-story is significant as the Vienna enterprise concentrated very much on science-led performance, following the “marginal gains” approach advocated by general manager of Team INEOS Dave Brailsford.

‘Marginal gains’ refers to small changes that can be made in many different areas which will have some effect beneficial towards achieving the defined goal. Among those areas the most significant are basic physical conditions: temperature and wind (the reason for having kept the precise date of the event flexible); wind resistance, with elaborate tests in wind tunnels to establish the most effective formation for the seven-strong phalanx of pacemakers; and minimisation of elevation gain, while maximising allowable elevation loss.

“Allowable”: a word with infinitely flexible meaning but which tacitly acknowledges the existence of rules which may be relevant to legitimising the performance. After all – there would be little credibility (and a lot of pain) if Kipchoge had run the distance down an Alpine pass dropping 40m or more every kilometre (such races have been run).

The project directors were unequivocal about this: they chose which rules they would observe, which they will modify, and which they would break. It’s very different to an open race like the Berlin or London Marathons – both of which Kipchoge has won, Berlin in his world record time of 2:01:39.

Competition rules preclude “assistance” through pacemaking and through supply of liquid or solid refreshment but most people would make allowances for that as an understandable concession: an acceptable ‘modification’.

What might not be understood is any compromise on the distance that has to be covered. Yet the ‘marginal gains’ approach pursued included marginally shortening the distance.

There is an official method of measurement, and guidance related to it, which has become universally accepted (and used to the exclusion of any other method) since tentatively introduced in the 1960s and popularised in the 1980s. This ‘calibrated bicycle’ method recognises that there is no such thing as an exact measurement – there is always a margin of error involved in the measurement process. Accepted practice allows plus-or-minus 1m for every kilometre. So Marathons are measured out 42m longer than might be necessary to avoid the embarrassment that when re-measured they could be found short– but the 42m is not definitive: there is no golden rule to determine what is (absolutely) necessary.

The margin of error was the marginal gain identified by the project directors because they embraced a new high-tech and highly expensive method which claims vanishingly small margins of error. They consequently felt justified in excising 42m from the distance measured out in all officially-measured marathons the world over.

To maintain some continuity with the real world of open competition the distance Eliud Kipchoge covered in the 1:59 Challenge was subjected to validation. If there is no built-in margin of error then there is a 50–50 chance that the course could fail a subsequent validation measurement.

To safeguard against this the course used for the project was “pre”-validated and found to be 42195m and 42206m by two measurers using the traditional (and approved) calibrated bicycle method. So it passed the test: but was in all likelihood about 40m (or 7 seconds) shorter than the distances run by Kipchoge for his Berlin and London victories.

These marginal gains added up to one big difference: this was not sport as open competition but as a scientific quest, costing millions upon millions of dollars, focused upon seeing what one superlative athlete could do in experimentally contrived conditions. No one gets another chance at this. Unfortunately Kipchoge’s feat may mean that when the 2-hour barrier is broken in open competition the public yawns: “but it’s been done before”.