by Peter Christ and Horst Milde, with additional material from Hugh Jones 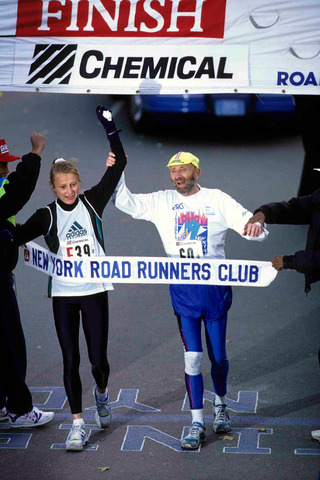 The man who ‘invented’ the modern mass-participation city marathon died 25 years ago.

On 9 October 1994 Fred Lebow, the co-founder of the New York City Marathon, died aged 62 as the result of a brain tumour.

The sixth of seven children Fred was born on 3 June 1932 in Arad in the Hungarian-speaking part of Romania. As an Orthodox Jew he fled, first from the Nazis and later from the Communists, through Western Europe until he emigrated to the USA in 1949 and settled in New York City.

During fitness training in New York’s Central Park for his favourite sport at the time, tennis, he discovered his enthusiasm for long-distance running. He joined the New York Road Runners Club towards the end of the 1960s and in 1970 became one of the co-founders of the New York City Marathon. He ran in that first race, run on a four-lap course entirely within in Central Park, and finished 45th out of 55 runners in a time of 4:12:09.

Slowly the event grew. Frank Shorter had won the gold medal in the Munich Olympic Games in 1972. Fred secured modest sponsorship from Olympic Airlines for a couple of years and in 1976 Shorter followed up with a silver medal at the Montreal Olympics.

1976 was America’s Bicentenary and public authorities were looking for ways to celebrate it. One of Fred’s co-founders of the race, Ted Corbitt, suggested inviting teams from the five boroughs of New York City to compete in the 1976 race. Somehow this was understood by the City as a proposal to run the race route through the five boroughs – and they liked the idea. At first Fred was reluctant. He was wary of the cost and getting all the permissions. But the Mayor’s offered full support to put on a citywide five-borough marathon.

Fred was never a man to miss an opportunity so he head-hunted the two top-name athletes in the world at the time, Frank Shorter and Bill Rodgers, who went head-to-head and launched the 1976 New York City Marathon as a new mass-participation model for the world.

There were 1549 finishers in the race, of 2100 entries accepted – it was less than the Boston Marathon had that year. But going forward New York provided the template. Five thousand entries were accepted the next year and 14,000 in 1979. In the 2019 race there were 53,518 finishers.

Horst Milde comments: “I met Fred in 1981 at the Stockholm Marathon and I introduced myself to him. The Berlin Marathon was just at the beginning of its career, moving from the forest to the city centre.

“But Fred also copied Berlin, he saw at the Berlin Marathon that we gave all ladies a rose at the finish, he copied that in New York.”

Peter Christ adds: “I met Fred Lebow in 1983 when the Sports Club Charlottenburg from Berlin organised its first group trip to the NYC Marathon and we had booked a booth at the expo to promote the 1984 Berlin Marathon. He was calm and polite despite the stress of the upcoming event, but he also seemed a little introverted and inaccessible.

“At the time, the Berlin Marathon didn’t have the significance it has today in the marathon scene. Like New York, and because of its successful example in becoming a city-wide event, Berlin was also able to relocate itself from the confines of the Grunewald to follow a route all around West Berlin. It was only in 1990, after the fall of the Berlin Wall a year earlier, that it took in all of the city.

“I got to know Fred better on the occasion of the 3rd AIMS World Congress held in September 1985 in Berlin and at Board meetings in the following years. I suddenly got to know a completely different side of the race director of what was then the world’s biggest marathon: friendly, cheerful, humorous and open to everything new.

“The nicest thing was that you could talk to him about anything under the sun for a long time without the word ‘marathon’ being mentioned. I had the feeling that at that time he had also largely revised his reservations about everything German, which were born of his personal experiences during his youth.

“The news about his serious illness in early summer 1990 made me very sad. A small hope that he could still defeat the tumour sparked in me when I saw how he ran ‘his’ marathon – the 69th of his career – at Grete Waitz’s side on 1 November 1992 and finished it in 5:32:34.”

Fred succumbed within two years but, in the New York City Marathon, left a legacy that has directly benefitted millions of people – and indirectly many millions more.