Race that defies description as the city comes alive for spring

With an open heart

Göteborgsvarvet Half Marathon
Sat 16 May 2020 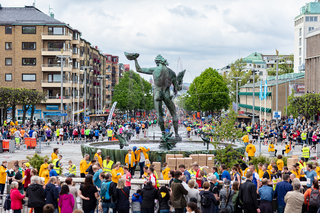 Göteborgsvarvet is more than just the world’s largest half marathon, it is a week-long festival of activities both for runners and the entire family.

I have run this half-marathon 10 times over the past 20 years, as well as other races in Europe and the US and can personally affirm that it just keeps getting better. Despite its rapid growth and record number of participants, everything runs smoothly and seamlessly to the point that you forget there are 60,000 people running the half marathon (80,000 including other races held during the week). People come from all over the world to run the race but it is especially popular among the 600,000 inhabitants of Gothenburg (Göteborg).

It seems as if everyone here has run it at least once. Companies challenge their employees to run and it is a common topic of conversation among friends who motivate each other. The race is run in mid-May as the city comes alive for spring and it usually offers perfect running conditions. It provides motivation to run during the cold winter months.

The course gives you varied scenic views with a few rather difficult inclines to keep you on your toes. It starts by taking you through Slottsskogen Park then over the Älvsborg Bridge and along the Göta Älv River by the old shipping harbour for which Göteborg is traditionally known. In the second half of the race you continue your journey over the Götaälv Bridge back to the city centre and up the main boulevard Kungsportavenyn where the streets are packed with enthusiastic spectators cheering you on.

Göteborg is known for the friendliness of its people and you feel it when you run. The race finishes in the Slottsskogsvallen Stadium, filled with screaming spectators who make you feel like an Olympic winner. It is an adrenaline rush from start to finish with live music, lively spectators and city views to keep all your senses occupied: you won’t even realise you’ve just run 21km.

Everything from the race bib pickup at the Swedish Exhibition & Congress Centre to the efficient water stops is perfectly planned and organised – just as you would expect it to be in Sweden – and the race is continually evolving and improving. The city puts on extra public transport during race week so you don’t notice any inconvenience that you would expect from such a large event. What you do notice is more energy and positive vibes.

Göteborgsvarvet is no longer just a half marathon: it has grown into a week-long programme of events with something for everyone. It defies description and should be experienced first-hand with all of your senses and an open heart.

See the latest news from Göteborgsvarvet Half Marathon