Distance Running 2020 Edition 1 > Race previews > Everything to win, for everyone

Enjoy the patina of old Bratislava

Everything to win, for everyone 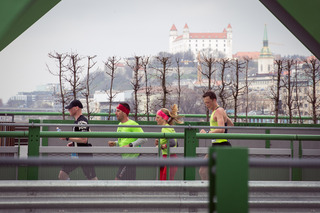 Although the ČSOB Bratislava Marathon on 5 April is only the 15th edition, the Slovak capital has a marathon history dating back to 1932.

The Štefánik Marathon was held then but wars both hot and cold suspended further races until after the fall of the “iron curtain” in 1989. From 1991–2001 a cross-border Danube marathon was staged from Bratislava to the Austrian village of Hainburg and back. After a five-year hiatus the most recent chapter of marathon history in the Slovak capital began on 2 April 2006 with a genuine city marathon.

The ČSOB Bratislava Marathon quickly gained huge popularity. From 760 participants in the first year the race now attracts more than 12,000 runners. In the 14 editions held more than 95,000 runners have entered. The 100,000th entrant, who will be granted free entry for the next five editions, will be among those running the 2020 race. Bratislava Marathon has quickly established a good reputation internationally as evidenced by the rapid increase in the number of foreign runners, up to 2212 (24%) in 2017.

Bratislava Marathon is for everyone: from children to grandparents. Marathon weekend starts on Saturday 4 April with the 4th Kids’ Races (from 300m–800m for several age categories), a 4.2km mini marathon (also for adults) and a 10km race. On Sunday 5 April the marathon, half marathon as well as marathon and half marathon relays take place. During the last three years 4000 runners have run the marathon distance and 10784 the half marathon.

If you are looking for a convenient marathon look no further than Bratislava: the official hotel is only a few dozen steps from the start line. Everything else is within a hundred metres: registration, presentation, changing rooms, bag drop and pasta party. In the start and finish area a rich cultural programme awaits for runners and spectators.

You can also find fan zones and music stages around the course.

The course is fast: one lap for the half marathon and two for the full distance. You can enjoy the “patina” of the Old Town and run through Michael’s Gate. The half marathon records stands at 1:02:33.

A unique free running-city sightseeing tour – the History Run – takes place on Saturday afternoon. There is no need to register. Our guide escorts you around a 6km course featuring 15 important monuments including St Martin’s Cathedral, where Maria Theresa was crowned Queen of Hungary in 1741.

Every participant of ČSOB Bratislava Marathon 2020 gets free use of public transport and to visit Bratislava Zoo and some museums for free. The entry fee is cheaper the further ahead you register and groups get the 15th entry free. Every runner gets a commemorative medal at the finish line. Those running the marathon and half marathon distance are given a special finisher t-shirt. Awards are made to the fastest “newcomers” for 10km, half marathon and marathon. If Marathon runners step out after one lap their times are valid for the Half Marathon. There are pacemakers for the marathon targeting times from 3 hours at 15-minute intervals up to 4:30, for the half marathon from 1:30 to 2hours and for the 10km from 40 minutes to one hour.

Many Olympic, Paralympic and European champions have taken part along with tennis stars and several of Bratislava’s Mayors.