A runners’ favourite beside the sea 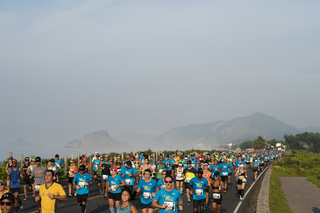 Imagine yourself running into one of the world’s most beautiful picture-postcard scenes while testing yourself on a flat route favorable to personal records. And also enjoying a weekend full of attractions specially designed for those who love to run. That's what the Cosan Rio City Half Marathon offers.

Nicknamed the ‘Wonderful City’, Rio has an unbeatable look to it. Wedged between the sea and the Atlantic Forest the 21,097m course of the Rio City Half Marathon takes full advantage of this urban setting.

In its fourth edition, Rio City Half Marathon is already one of Brazil’s most important half marathons. In 2019 there were 4824 entries with runners coming from all Brazilian states and countries such as the United States, Argentina, France and Germany. 38% of runners were women. The organisers expect a 20% increase in numbers this year.

The race is a two-day event with world-class organisation that offers everything runners could need: from the exhibition (a day full of sports-related activities, talks and services) to the finish area. Along the course participants have water and isotonic drinks available every 3km, wet sponges and carbohydrate gel as well as musical attractions and strategically-placed medical posts. At the finish line runners are offered muscle recovery services, photo panels, medal engraving and more.

“Our aim is to offer runners a unique experience. In addition to the opportunity to run through one of the most beautiful cities in the world, runners can attend exclusive lectures and participate in the various attractions at the Expo,” says race director Paulo Carelli.

The race starts at Recreio dos Bandeirantes, in the West Zone, and finishes in São Conrado, South Zone. The route is a runners’ favourite because it is almost entirely beside the sea and almost 100% flat. The single small rise, to access the Elevado Joa, offers one of the most beautiful views in the race.

On race weekend you can enjoy the city’s natural beauty and visit some of its many touristic spots such as the famous Copacabana and Ipanema urban beaches. It’s best to arrive early in Rio – Friday afternoon – and stay a few days longer to enjoy the charms of the city that in 2012 received UNESCO World Heritage status.

Two of the must-see spots in Rio are Cristo Redentor (one of the Seven Wonders of the Modern World) located atop Corcovado Hill (710m above sea level) and overlooking most of Rio de Janeiro city; and Pão de Açúcar (Sugarloaf Mountain), which can be reached by cable car from Praia Vermelha, in the Urca neighborhood.

Prepare yourself for your most beautiful and fastest 21km – in Rio.

See the latest news from Rio City Half Marathon