Become part of the family in Transylvania 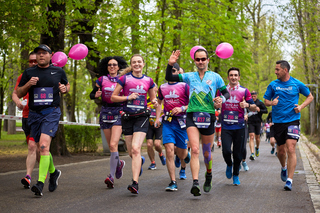 Joy is the word that best describes the Wizz Air Cluj-Napoca Marathon, one of the most vibrant races in South Eastern Europe, in the heart of Transylvania. Founded in 2011 by the local running club, this friendly running event celebrates its 10th anniversary this year.

The catchy and empowering slogan: “Grow your wings: be a legend in Transylvania” appealed to runners from across Europe so much that 7117 runners from 37 countries participated in last year’s edition.

Cluj-Napoca is known as one of the friendliest cities in Europe and it carries the stories of a legendary past between its fortress walls. The marathon course leads runners past the most picturesque parts of the city: the Central Park, the embankments of the River Someș, the university area, the old city walls, “Mirror Street” and the baroque and Gothic-revival style palaces.

From the start in the Cluj Arena Stadium runners can feel an atmosphere reflecting a unique local cultural mix. Romanians are chatty and tend to include everyone in their conversations so you will make lots of new friends when you do any of the races.

Live music or cool jamming sessions with friendly supporters boost your energy levels along the race course. At the finish line there is a super tasty street food area where you can find local specialities: traditional gulyás, soups and desserts.

Wizz Air Cluj-Napoca Marathon may be a young race compared to other races in Europe, but it projects enthusiasm for the joy of running which is contagious. The local community run and train together, and know each other well, but expats are welcomed into the community and quickly integrated.

First-time marathoners and first-time half-marathoners wear a distinct number and receive special encouragement and support during the race. It is as if you are becoming part of a bigger family here in Cluj-Napoca.

Families are welcome, for there is a kids’ race on the Saturday before the main races. The main challenge is to run the race of your choice and become a legend in Transylvania while smiling at the cameras. The Marathon’s photo team covers the entire event and it is very likely that they will get some great shots of you in this picturesque race.

Many charities participate in the event. “We want to help and inspire people through running,” says race founder Horațiu Morar.