Record temperatures at half marathon on the Elbe 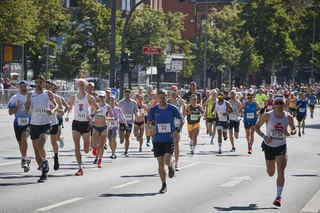 The temperature on Hamburg’s famous Reeperbahn at 10am was 28ºC and rising. City senator Andy Grote fired the starting gun and 8,402 runners set off in blazing sunshine.

8,056 of them made it to the finishing line at Hamburg congress centre. “It is sensational that 96% of the runners who started the race finished it in this heat,” said a delighted Karsten Schölermann, the organiser of the hella hamburg halfmarathon.

“We have been preparing for this battle against the heat for over a week and increased the number of water stations from seven to twelve. We sent out extra heat advice to all runners by email and set up extra showers and wet sections.”

“Due to the weather we had roughly twice as many incidents as usual,” says Sebastian Müller, operations leader of the voluntary medical team run by ASB. “Most were circulation complaints and 80% could be dealt with on the spot. A few people had to go to hospital but there were no serious problems there either and most could go home soon after observation.”

As expected the water stations were unter severe pressure. At the first two stations many runners took the opportunity to pour several cups of water over themselves, which made it difficult to supply enough water for all 8,400 runners. “But we did it!” says water manager Christopher Connor proudly. “We managed to keep the supply up, with the exception of the last ten minutes at the 5km and 7km stations.”

Course records were hardly to be expected in view of the high temperatures. It should be recorded though that the race was won by the favourites, Olympic champion Stephen Kiprotich and Melat Kejeta. Benjamin Franke and Michaela Sarman-Lein were the fastest male and female Hamburg runners.