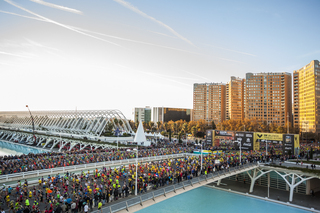 Valencia Marathon race director Paco Borao recalls: “A decade ago the Valencia Marathon was known as a nice, friendly organisation. We were dreaming of getting the course record below 2:10 and pushing our entries up to above 4000. We still looked enviously upon the more important Spanish marathons in Madrid and Barcelona.”

Since then the Valencia Half Marathon has become a world record course in the same way that Berlin is seen as such for the Marathon. The Marathon has also advanced in leaps and bounds so that last December the course record was set at 2:04:31, there were five men under 2:05:30 and there was a total of 22,000 runners in the field.

What brought on this transformation in the significance of both these formerly middle-ranking races?

It started in 2011 when the Valencia Marathon reached agreement with its municipality to run the marathon through the most beautiful areas of the city. Immediately afterwards, in 2012, it became linked with the Fundación Trinidad Alfonso and the association has remained strong for the last seven years.

These were just the first steps taken by the charitable foundation, which is presided over by the Valencian businessman Juan Roig. As well as supporting these two great races, Fundación Trinidad Alfonso set up Valencia Ciudad del Running, a movement that brings together and organises the sport within the Valencia Region. Among the Foundation’s many initiatives in this field perhaps the most notable was the building of a purpose-made running circuit in the Jardín del Turia (a linear park and gardens laid out along the former course of the Turia River). The Foundation spent two million euro on the project and undertook to pay for its upkeep for ten years.

Through running, Fundación Trinidad Alfonso’s aim is to foster an effort-based culture and its values throughout the Valencian Autonomous Community, using sport as a vehicle. With these goals in mind the Foundation seeks to make the Valencian region an international reference point in this field and to turn it into a true ‘Community of Sport’.

The brand brings together, organises, and fosters sports events and initiatives in the region. This effort spans everything from big events to supporting individual athletes planning to compete in the forthcoming Olympic Games and Para-Olympic Games in Tokyo.

The Foundation is just one of the vehicles through which Juan Roig has sponsored sport. For the last 30 years, Roig has also sponsored Valencia Basket, the city’s basketball team. In addition to underpinning the first team he has also done a great deal to support female players and rising stars. Two years ago he built a superbly-equipped basketball complex – L’Alqueria del Basket – as a home for the sport for generations to come.