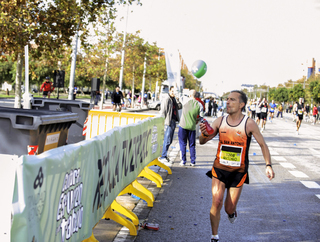 AIMS has announced the founding members of the AIMS Sustainability Commission, the next step of the organisation’s engagement in promoting good environmental practices among its member races.

The members of the Sustainability Commission are being announced today, Wednesday 5 June, to coincide with World Environment Day and Global Running Day.

This year, the United Nations Environment Program has chosen the theme #BeatAirPollution to celebrate World Environment Day. For the running movement, clean air and a healthy environment are essential, not only for the development of our sport but also to safeguard a better quality of life worldwide.

By endorsing sustainable and environmental practices, AIMS member races are contributing to this global campaign to become an ethical link for a better planet.

AIMS has for many years been a pioneer in promoting good environmental practices among its member races. In 2013, the first AIMS Green Award was presented as part of the AIMS Best Marathon Runner Awards Gala in Athens, the home of the marathon.

During the 9th Symposium in Athens in 2015, AIMS made a strong commitment to tackling climate change and was the only international sports organisation that sent a declaration signed by its President to the historic COP21 (2015 United Nations Climate Change Conference), held in Paris, in December 2015.

The founding members of the AIMS Sustainability Commission bring passion, knowledge and experience of working to promote sustainable running events. All six recipients of the AIMS Green Award have a representative on the Commission.

The Commission is led by International Sustainability Expert George Kazantzopoulos.

The founding members of the ‘AIMS Sustainability Commission’ are:

The AIMS Sustainability Commission’s scope will be: