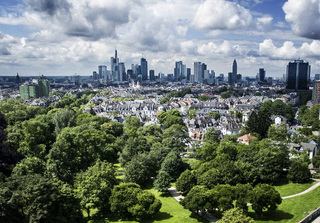 A bit greener every year: The Mainova Frankfurt Marathon is trying to continually reduce its environmental impact. “We are on the way to being a ‘green marathon’ and getting closer to our goal every year,” says race director Jo Schindler.

On UN World Environment Day (June 5) the results of the race’s efforts are respectable. Since 2005 the organisers have taken many steps to make Frankfurt’s biggest annual sporting event more sustainable. And runners and sponsors appreciate it.

Over the last 14 years the Mainova Frankfurt Marathon has invested over 230,000 euro in environmental protection measures. These are in areas ranging from catering, rubbish management and merchandising to energy and water.

For example, the 38th edition of the biggest German city marathon on 27 October will use no plastic cups at all. Last year these were still used for hot drinks (tea) at the refreshment stops. Even then, in co-operation with drinks partner Rosbacher, three-quarters of the 450,000 cups used for runners had already been replaced with FSC- and ISO-certified paper. Now this will be raised to 100 per cent – in the framework of an improvement waste management concept developed with the city’s waste disposal utilities and the “Clean Frankfurt” unit. The concept will be improved further using in-depth analysis of the rubbish produced at the refreshment stops.

This year’s edition of the classic race beside the river Main will also finance – donating one euro per participant in the 42K race – the planting of olive trees in the Tuscan homeland of race partner Fattoria La Vialla. This company’s organic foods are fed to runners at the Fattoria La Vialla Toscana Pasta Party. This project starting in 2017 has raised 12,000 euro and planted 4500 olive trees, which absorb around 240 tonnes of CO2 annually. The goal is to plant a further 4500 trees in the coming year.

Along the course and at the finish, another race partner, Querbeet organic produce, will distribute 5.5 tonnes of organic bananas and 1.2 tonnes of organic apples to runners. With organic fruit the CO2 footprint can be five times less than conventionally farmed produce. The organic catering has been praised as best practice by the German Olympic Federation.

Together with title sponsor Mainova the Frankfurt Marathon is counting on the power of the sun. The organisers have recently financed an installation of solar panels covering around 150 square metres on the roof of the Mainova office in Frankfurt. It will produce around 22,500 kilowatt-hours per year of environmentally friendly electricity, saving around twelve tonnes of CO2. The marathon organisers’ aim is to produce sufficient carbon neutral energy to match the amount used at their event.

“Sustainability is a central plank of the Mainova Frankfurt Marathon,” say race director Jo Schindler. “There’s no greener way to get about than running. And we put on a running festival every year that’s as friendly to the environment and climate as it can possibly be.”

The Frankfurt Marathon plans to share its green expertise with other race organisers in future. Course manager Manuel Friedrich has joined the newly created Sustainability Commission of the Association of International Marathons and Distance Races (AIMS).

The Mainova Frankfurt Marathon will take place on 27 October 2019.