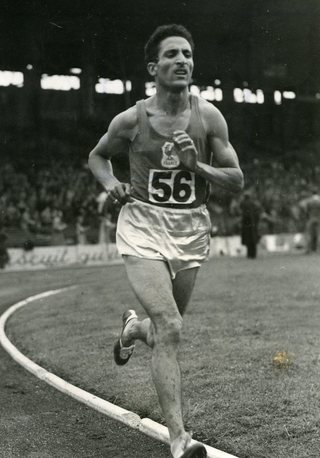 On the track Mimoun won three Olympic silver medals, finishing second behind Emil Zátopek in the 10000m in 1948 and in both the 5000m and 10000m in 1952. He was also the silver medallist in both events behind Zátopek at the 1950 European Athletics Championships.

Born Ali Mimoun Ould Kacha in French Algeria he was the first of seven children in a poor Arab-Berber family. He settled in metropolitan France and became Alain Mimoun. He was eager to integrate but found it no easy task and ended up joining the Foreign Legion. He served on the Belgian front when the Second War started and after the fall of France in June 1940 Mimoun was posted to Bourg-en-Bresse in the Free Zone of Vichy France.

He discovered his talent for running quite fortuitously. In Bourg-en-Bresse there was a stadium next to the barracks and he trained there frequently. On impulse he competed in some local races without any serious preparation. He won his first running event, the 1500m departmental championship, by beating the six-time defending champion in front of 4000 spectators. He then ran a 5000m race in less than 16 minutes, drawing the comment from a local paper that: “A marathoner is born. [Mimoun] could become an Olympic champion.”

But not soon: the next Olympics were still six years away and meanwhile there was a war to fight. In 1942 Mimoun was posted to Algeria where he won both track and cross-country races and became the North African cross-country champion that year. He was called up for the Tunisian Campaign and in 1943, as the Allies gradually pushed the Afrika Corps out of Tunisia, Mimoun continued the fight in the Italian Campaign. He suffered a bad shrapnel wound in his left leg at the Battle of Monte Cassino in January 1944 but refused amputation and underwent surgery that proved successful. Returning to combat that summer he spent the last year of the war fighting his way through France and Germany.

He returned to Algeria after the war but soon went back to Paris and joined the Racing Club de France. He also worked as a waiter in the Club under penurious conditions but thrived as a runner, finishing second in the French 10000m championships in 1946 and taking the titles at both 5000m and 10000m. He won his first International Cross-Country title in 1947, establishing his prospects for the first post-war Olympics to be held in London in 1948. But Mimoun was up against an ascendant Emil Zátopek in the 10000m and finished a distant second, 300m behind him.

It was the start of a firm friendship but a frustrating one for Mimoun. In 1949 he won the International Cross-Country title again but the following year lost out to Zátopek in both the 5000m and 10000m at the European Championships. At the 1952 Olympics it was the same story although Mimoun dramatically narrowed Zátopek’s margins of victory. He finished an isolated second in the 10000m, 90m behind, but in the 5000m he led into the final bend and was only a second adrift at the finish line, improving his personal best by 14 seconds.

He lined up at the Melbourne Cricket Ground to run his first marathon alongside his friend, defending champion Emil Zátopek, and 44 other runners. It was mid-afternoon and the temperature was 39ºC. Mimoun wore a white bandana to protect his head from the sun as he ran among a lead group of 13 runners which dwindled to five at 20km. The American John Kelly then upped the pace and Mimoun followed, surging past him on the uphill, and by 25km had built a lead of 50 seconds. He steadily increased his advantage end entered the stadium 90 seconds ahead to finish in a time of 2:25:00.

Mimoun had defeated Zátopek for the very first time in his career but was surprised not to see him coming into the stadium as he waited at the finish line. Zátopek arrived four and a half minutes after him, in sixth place. Zátopek, who had been in the Czechoslovak armed forces for a decade, formally saluted his friend before falling into an embrace.

Returning to Paris he was met by a hero’s reception at the airport but returned to work at the Racing Club de France café the very next day.

From 1948 to 1960 Mimoun represented France four times in the Olympic Games. He competed for France 86 times and won 29 senior national titles in the 5000m, 10000m, cross-country and marathon. Mimoun continued to run in his later life and set several age-category records.