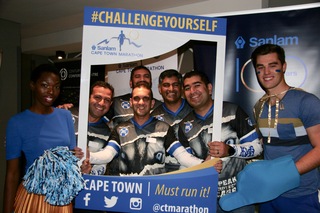 Cape Town’s beautiful springtime marathon, which for the last three years has retained IAAF Gold Label status, is this year aiming to raise in excess of three million South African rand (185,000 EUR) for the 50+ charities associated with it.

This is a 50% increase in charitable earnings from last year’s event, which was awarded Participation Event of the Year at the annual Sports Industry Awards.

“It’s extraordinary what city marathons can do for their local communities,” says race director Janet Welham. The biggest marathons in the world can raise sums in the tens of millions.

Commenting on the ease involved with rallying public support for a chosen charity, Welham says: “Social media is the tool to use to generate awareness around your favourite cause or charity, and the steps involved with linking yourself up to our fundraising platform, GivenGain, which in turn pays the charity once you’ve run the race, are very simple.”

Marius Maré, CEO of GivenGain explains: “Setting up your fundraising page takes less than a minute, the most important part is to tell why you’re raising funds for the charity you’ve chosen. The average participant on the GivenGain platform raises about ZAR 7,500 (465 EUR) from about 15–20 donations in his or her network of family and friends. It might not sound significant at first but imagine 20,000 participants all raising funds!”

Maré believes the event organisers have to ensure that fundraising is a part of an event’s DNA, much like the Sanlam Cape Town Marathon’s Run4Change legacy programme.

And the charities themselves have an equally important role to play, he says. “Use your influencers, ambassadors, donors and anyone you know who participates in active events, and send them to the event’s fundraising page,” he advises.

Mariska Oosthuizen, head of brand at race sponsor Sanlam says, “We are pleased about the positive social impact the race continues to make on Cape Town and the broader South African public. Giving back has always been an important aspect of the event. This year we continue to do so and will introduce a new and dynamic campaign to support CANSA, the organisation Sanlam has partnered for more than 27 years to help raise millions of rand for the battle against cancer.”

This year’s marathon, which takes place on Sunday 15 September, looks set to attract in excess of 26,000 runners, from South Africa and internationally.

Community support for the marathon grows year on year, with last year’s event featuring 17 water stations manned by over 600 volunteers, 20 bands and DJs performing at the stations, and over 20 charities and 10 athletic clubs involved with the stations.