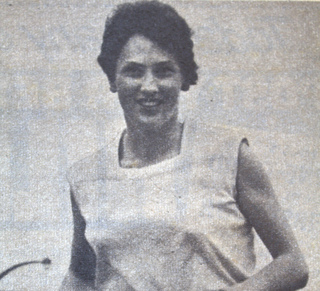 Dale Grieg, a Scottish long-distance runner who became the first official holder of the world best time for the women’s marathon, died on 12 May 2019, aged 81 in a hospice in Paisley, Scotland.

On 23 May 1964 she ran 3:27:45 on a hilly course in the Isle of Wight Marathon (GBR), a time recognised by the IAAF as the inaugural world best – 20 years before the first Women’s Olympic Marathon was held.

Her mark – which she later said had been mis-reported and was in fact 20 seconds faster – was surpassed by New Zealander Mildred Sampson three months later (3:19:33) although the validity of this time is disputed as it was recorded in a time trial.

Greig trained in thin-soled gym shoes and was regarded as an object of curiosity and ridicule when she trained on the streets. She was excluded from races open only to men. For those she could enter she paid the entry fee and all her own expenses while even the biggest races only offered sundry household items as prizes.

Unaware that Greig trained over distances of up to 30 miles and had represented Scotland at cross country for 13 years the Isle of Wight organisers got an ambulance to trail her during the race. She set off five minutes early – a precaution taken to avoid her being considered as in the same race as the 67 men also competing. Most overtook her but 19 of them dropped out in the 25C heat and she overtook many of them in the closing stages. Athletics’ officialdom was not impressed, chiding the organisers for something that was ‘not in the best interests of the sport’.

Undeterred, Grieg herself went on to achieve new firsts: first woman to complete the hilly Isle of Man 40-mile TT course and first woman to finish the 54-mile London to Brighton race. She won the inaugural world masters’ marathon held in Paris in 1974 – the first championship in which mixed-gender races were held. It was a foretaste of the mass-participation movement that took off over the next five years and which shaped the future of distance running.