Fastest time and biggest mass-participation marathon ever run in Denmark 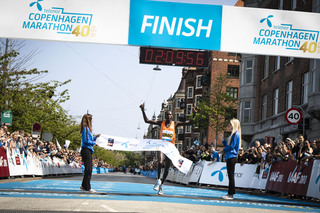 A row of records were all smashed at Sunday’s Telenor Copenhagen Marathon. Not only did Jackson Kibet Limo break the course record in the Danish capital with a winning time of 2:09,54 hours; the 31-year-old Kenyan also produced the fastest time ever on Danish soil, lowering the previous best set in Odense back in 2012 by nearly two minutes.

With his time of 2:09:06 from Paris in 2014, Limo did have the best PB of all. At 30K, however, all seemed to be set for a duel between the debutant Victor Kiplimo (KEN) and Ethiopia’s Gebre Roba Yadete. The two runners broke free from the leading pack after 29K, but a few kilometres later Yadete could no longer keep up with the pace. Then at 37K Limo emerged out of nowhere and took the lead, building up a gap of 70 seconds for the last five kilometres.

“My goal was to break the course record. I ran my own race, but at 25K I started to feel a minor hamstring. Luckily it disappeared after 32K,” said Limo who despite victories at marathons in Osaka in 2013 and Porto in 2017 regarded today’s win at his most important of his carrier.

In the women’s race, Ethiopia took the first three spots. The winner, Etalemahu Habtewold, covered the classic 42,195 km in a personal best of 2:29,29, thereby improving the course record from 2010, which also stood as an all-comer’s record.

Two Danish male pacers led a group of four women through the first half in 1:13,33. With 10 kilometres to go, Habtewold was alone in the lead. Her compatriot Dinknesh Mekash caught up again with only five kilometres to go, but in the end had to settle for second place 53 seconds behind Habtewold.

With 13,280 participants, the 40th anniversary edition of the race could register another record: as the biggest marathon race in Denmark ever.