You can now run along the “best beach in Europe” 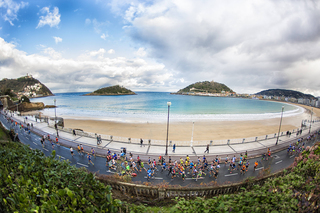 TripAdvisor users have no doubt about it. For the third year in a row they have chosen La Concha Beach in San Sebastian, Spain as the best European Beach and the fourth best beach worldwide.

So if you like running, congratulations, it’s time to celebrate the fact that you can now run along this beach – if you register for the Zurich San Sebastian Marathon on 24th November.

You can choose among 3 different distances – marathon, half marathon or 10k – and any of those races go along this beach that everybody falls in love with. You will also feel the unconditional support of the spectators as they gather along the route in order to cheer all the participants of this marathon, which will be celebrating its 42nd edition this year.

Moreover, from La Concha beach you will also be able to see one of the most beautiful places in San Sebastian, its bay and Santa Clara island. Running in San Sebastian is much more than just running. It is a town to visit and discover, to enjoy yourself in a flat route where runners often get their PB. In fact, Spain’s current women’s marathon record was achieved in this marathon held in San Sebastian, situated in the north of Spain and very close to France. The town also hosted the Marathon World Cup back in 1993, where the best marathon runners could already run along the current best European beach.

San Sebastian already knew it had a great flat route – but now it’s time runners knew they can run along the “best European beach” and fourth worldwide.