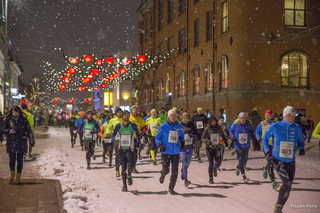 You might think that you know what it takes to run a half marathon – but perhaps not the Polar Night Half Marathon in Tromsø at 70 degrees North.

Why expend your energy in such difficult conditions when there are so many great events, with flat courses and perfect temperatures, for chasing a personal best? Maybe because it offers the chance of running under the Northern Lights, in the crisp, clean Arctic air and amid the snow with hundreds of burning torches lighting the course ahead. It’s actually pretty amazing.

The Polar Night Half Marathon was first held in 2004 with 136 adventurous runners starting in the half marathon and 10km run. Six years later the race was attracting three times as many polar runners. In January 2019, with a 5km race added to the programme in 2012, there were a record-breaking 2177 participants, with more than 1100 in the Half Marathon alone. Runners from more than 60 countries were represented.

Participants travel here for more than the race alone. Tromsø is a well-known tourist attraction and has become especially popular in recent years as a Northern Lights destination. A well-established tourism industry caters for all adventurous travellers keen to experience the Arctic, the Aurora Borealis (Northern Lights) and winter activities such as dog and reindeer sledding, skiing and snowshoeing.

Situated between the mountains and the fjords, the old fishing village of Tromsø has for centuries been the main port for expeditions setting out to explore the Arctic polar regions. The first known ski race in the world was held in Tromsø city centre in 1843. Tromsø is well known for its cuisine based on local seafood and other high-quality Arctic specialties. Any runner who stays on for a few days after the race leaves with their mind and body full of impressions.

The Polar Night Half Marathon race course is fairly flat and follows the contours of Tromsø Island from the city centre around the southern point towards the northern tip and back again. Preparing for the race is a challenge in itself as the running surface could be wet or dry tarmac, crispy cold snow or a sheet of slippery ice. Or all of these. As race organisers we’ve seen all kinds of ways people prepare: some think snowshoes will be the best way to navigate the streets of Tromsø; some suppose a t-shirt is enough to combat the Arctic chill; and others dress like they’re heading for the North Pole itself.

The race website has good advice for how to dress. Don a windproof jacket and pants (or winter tights), thin woollen base-layer underwear, gloves and a hat and you are ready to battle the elements. Ordinary running shoes are usually sufficient but when conditions get really tough spiked shoes offer welcome security.

Travelling to Arctic Norway is not as arduous as you might imagine. Although 400km north of the Arctic Circle there are frequent flights direct to Tromsø from several Norwegian and European cities. It is probably the most accessible of the world’s northernmost cities. Less than two hours from Oslo and about five hours from London is all it takes to get to the starting line of one of the world’s most unique races.