Spectacular stage with the joy of music 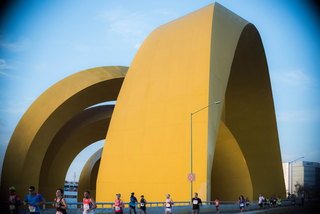 Some races have great prestige; others have great colour and cultural appeal... but the Guadalajara Marathon has it all.

With great care for the runners, a highly competitive field and smooth organisation the Guadalajara Megacable Marathon hydrated by Electrolit gained an IAAF bronze label for the last edition; in November the goal is silver.

The first half of the marathon route is almost the same as that of 21K Guadalajara, which in February made history by being the first Gold Label event in Mexico.

The spectacular stage of the start and finish is framed by the Glorieta Minerva and the Arcos de Guadalajara, traditional sites that originally welcomed visitors to the city.

From the starting gun, the race gets underway amongst examples of the most emblematic modern architecture, such as the Matute Remus Bridge and the Arcos del Milenio – fantastic images that make the Tapatíos proud.

As an added attraction to the competition, which will be the second edition of a series of six races between marathons and half marathons, runners will be able to collect shirts with stamped letters that will eventually form the word ‘Guadalajara’. The medals are also collectable and symbolise a petal so that when three are joined together they form a representative flower of the traditional Huichol art in this region of the country.

If you’re not ready for a marathon, there is also a relay category in which teams of four runners compete among categories of sports clubs, municipalities, states or countries for podium honours.

More than 10,000 runners will experience the intensity and enjoy every kilometre of the Marathon, encouraged by supporters in more than 60 ‘Animation Islands’ garbed in multi-coloured traditional wrestling masks, hats and costumes.

The Municipal Sports Council organises both the Guadalajara Marathon and the 21K Guadalajara Electrolit, two of the continent’s most outstanding races. Each event involves government institutions, universities, neighbourhood groups and volunteers, so that the entire city embraces the race.

The region’s gastronomy, culture and places of entertainment allow visitors to have a pleasant stay, including visits to Tequila (the city of the famous drink, just 50 minutes from Guadalajara), as well as paradisiacal beaches just three hours’ drive away.

The culture of sport in the State of Jalisco is such that its athletes lead the country, and have performed with credit worldwide. Ambassadors such as the golfer Lorena Ochoa, the F1 driver Sergio Pérez and the boxer Saúl ‘Canelo’ Álvarez are shining examples.

To live Guadalajara is to feel at all times the joy of music; the mariachi, the charrería and the tequila that are Mexico’s most representative icons. Now the marathon belongs to that list.

For information and registration see: www.maratonguadalajara.org