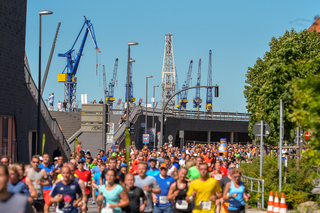 The 10,000th place in the 25th hella hamburg halbmarathon was sold online on Monday 13th May. This means the 25th anniversary race has already beaten last year’s sales – in 2018 it took another week to reach 10,000 sales.

If more than 12,320 registrations have been made by the time the start gun goes off at 10am on 30th June, it will mean 15 years of uninterrupted growth for the race, securing its position as the second biggest stand-alone half marathon in Germany.

“Our success is down to continual development of the half marathon,” says the race director Karsten Schölermann. More than 50 tourist attractions near the half marathon course bring participants from across the globe to Hamburg – with registrations received so far from 72 nations. The number of events along the route has also mushroomed, with nearly 40 DJs, live bands, acrobats, cheering zones, drummers and samba groups turning the route into a runners’ party.

This year’s 25th anniversary will be run as usual under the motto “Hamburg Half – Double Fun”. Online registration closes on 18th June 2019.