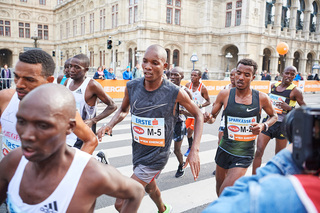 The Salzburg Marathon is set for a record-breaking event this weekend. Nearly 8,400 runners from 79 countries get ready to compete in the Austrian city.

This marks a new participation record for the race which describes itself as a “Running Festival in Mozart’s hometown”.

Top favourite Victor Kipchirchir from Kenya is a late entry to the race and leads the charge to break the course record. The 31-year-old set his personal best of 2:07:39 when winning the Valencia Marathon in 2016 and also triumphed at marathons in Warszawa and Santiago de Chile. He is the fastest runner that has ever been on the start line in Salzburg. In the half marathon he boasts a world-class personal best of 59:31 minutes back in 2012. It is clearly his target to celebrate his first victory in Austria and to break the Salzburg Marathon course record of 2:14:16, set by Eliud Kiplagat in 2013.

Victor Kipchirchir has everything what it takes to produce a new record performance in Salzburg. An experienced runner with many international races he finished ten marathons and broke 2:10 on four occasions. Besides his fastest time of 2:07:39 in Valencia 2016 he ran 2:08:52 in Seoul 2017, 2:09:13 in Frankfurt 2012 and 2:09:59 in Warszawa 2014. The Kenyan definitely wants to do better than he did at his latest appearence in Austria. Six weeks ago he aimed for a podium place at the Vienna City Marathon and passed halfway in 63:22 as part of the leading group before dropping out after 30km.

While no other runner in Salzburg matches the potential of Victor Kipchirchir, there is more talent assembled on the start line. Kenyan Rogers Melly Kipchirchir with a PB of 2:13:38 and Stephen Katam Kipngetich with a PB of 2:14:08 want to improve their times. Rogers Melly came second in both Lodz and Münster marathons in 2016 with a 2:13 time. Should Victor Kipchirchir get into trouble, Roger Melly might have the chance for his first international victory.

Stephan Katam is the winner of Belgrade marathon 2017 and ran his fastest marathon in Tel Aviv 2016 finishing in third place. Marathon debutants Anthony Karinga Maina and Philip Kirui add more quality to the elite field. They have proven themselves at half marathons. Maina ran 62:36 in high altitude at Nairobi 2016, Kirui clocked 63:11 in 2017.

The women’s race features Ethiopian Gadise Gudisa Negese as the favourite. At 21 she contests her first marathon race as an important new step in her career. Julia Brugger of Germany is another debutant. She aims for a time of about 2:50.

Shorter distances at the Salzburg Marathon weekend are expected to bring some sporting highlights as well. Swiss athlete Marco Kern hopes to improve his personal best of 65:57 minutes in the Sparkasse Half Marathon. Newly crowned Austrian national marathon champion Cornelia Moser (PB 2:39:22) is ready for a start at the Hervis-10K Salzburg CityRun.

Salzburg Marathon is certified as an ecologically sustainable event by Austrian control authorities. Runners enjoy high quality organic food made of local products at the marathon village. Public transport to and from the race is available free of charge to all participants within the city of Salzburg on their day of running by showing their bib number.