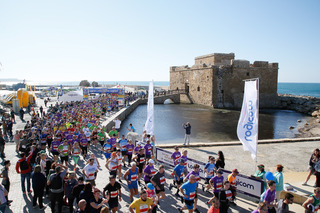 The streets of Pafos were flooded once again with around 3,500 runners who participated in the 21st Logicom Cyprus Marathon, held on Sunday, 17th March 2019.

The running festival incorporated four distances on Sunday with a Marathon, Half-Marathon, 10km Race and a 5km Fun Run. On Friday 15th March, a 5km “Cyprus Wine Run” was organized at the Vasilikon Winery in the picturesque village of Kathikas. Added to the running events, the “Cyprus Marathon Symposium” was organized for the first time, which included lectures from all parts of the running world such as technology, history, performance, impact on society and sports tourism.

The story of the day was the back to back win of the British runner Adam Holland who won in 2:35:03, just two minutes over the course record. He was more than seven minutes in front of the second-placed runner Ian Livesey (finish time of 2:42:31), also from Great Britain.