Judy Scrine can’t resist the lure of the unknown – or little-known. So she booked herself on a trip to the Pyongyang Marathon in North Korea 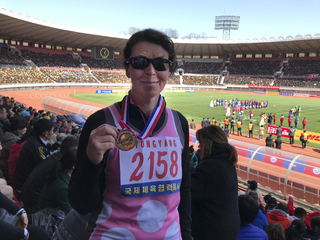 Signing up was easy: I just googled Pyongyang Marathon which took me straight into the site with various marathon packages offered. I run as part of my effort to raise as much money as possible for the charity Breast Cancer Now and am always looking for new races.

I’d known about the race for nearly three years. I entered it because I am a travel nut: the more unusual the better – and North Korea ticked a lot of boxes. It was a chance to get a glimpse of this mysterious country from the inside, if only a very controlled glimpse.

Communications were a bit difficult as the team don’t have much internet or email access when they are in North Korea. Things were made more difficult because one client went against their careful instructions on how to pay so that the bank accounts were frozen and I couldn’t pay by bank transfer. There was a worrying time when I wasn’t sure if my place was safe or not. I also had to pay a credit card surcharge as the bank accounts remained frozen – somewhat frustrating but absolutely not the tour company’s fault.

Everything was provided from Beijing in one package including visa, airport transfers and all travel in North Korea, all accommodation (full board), a full itinerary, the race entry etc. The instructions they circulated were very comprehensive.

The most difficult part was arranging my own double-entry visa for China, securing accommodation in Beijing, getting to the tours office for the briefing etc. But in the end it added to the adventure.

I deliberately went without too many expectations… but it was fantastic. There was a bit of hanging around beforehand but far less than in Boston or New York. The stadium experience was beyond extraordinary. I will never forget it nor know the like again. Most people did the half rather than the full marathon because of the draconian and strictly enforced cut-off time. This was frustrating. I would have preferred to run the full Marathon but I didn’t want to risk not finishing in the stadium or, far worse, not being allowed to finish at all.

Running through the streets of Pyongyang was ‘other-worldly’ with its extraordinary buildings and pastel colours. The race did impose some strange requirements: we couldn’t wear tops with lettering above a certain size, flags, or images that might cause local offence (hard to predict what those might be). Although we couldn’t take GPS devices into the country everyone did. This required some pretty fast talking at the airport. We had to be very careful what we photographed and there was every risk that cameras could be confiscated and photos deleted.

The field of runners was varied. Full-distance marathoners had to be able to guarantee a sub four-hour time. The locals were tiny, fast and very well disciplined. Spectators were extraordinarily enthusiastic both in the stadium and along the route. The general atmosphere was great. I felt safe at all times. We were always accompanied: I think if we had strayed even a few inches from the route during the race we would have been politely shepherded back on track.

It was slightly chaotic at the end of the race: knowing how to get to the spectator area in the stands and how to access loos was difficult, but no more so than in the Abbott Majors.

The tour was fantastic. Our guide was excellent and so enthusiastic that we were rushed around from the crack of dawn until evening the entire time we were there. She wanted to show us as much as possible. No one would go to North Korea for the food, but it was all part of the experience.

I would absolutely recommend this race. North Korea is a fascinating destination in its own right. I tend not to repeat the same event so it is a reflection on me rather than the race that I will instead travel with the same tour company to Mongolia, Turkmenistan, and Tajikistan for the marathons there.