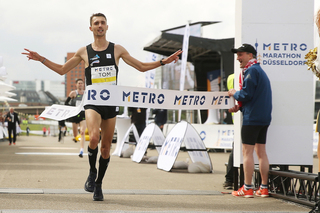 Tom Gröschel and Anja Scherl are the winners of the Metro Marathon Düsseldorf. It is the first time in the history of the event that there are two German winners.

Both also took the German Championship as this was included in the race. Tom Gröschel clocked 2:13:49 in cloudy but dry weather conditions, which is a fine personal best and the fastest time by a German this year. In a close finish New Zealand’s Malcom Hicks was second in 2:13:51, just two seconds behind the winner. Denmark’s Thijs Nijhuis took third place with 2:14:18.

Only three weeks after running a marathon comeback race in Hannover, where she finished eighth in 2:32:31, Anja Scherl was a surprise late entry. She took the race in 2:32:56, followed by Hiruni Wijayaratne of Sri Lanka and Turkey’s Ümmü Kiraz, who clocked 2:34:10 and 2:34:37 respectively. In her comeback marathon after injury Germany’s Anna Hahner finished fourth in 2:36:09.

Organisers of the 17th Metro Marathon Düsseldorf registered a total of 20,000 athletes, including races at shorter distances. 3,500 of them were marathon runners. More than 60,000 spectators lined the streets to support the runners.

In a close men’s race a group of four runners passed the half marathon mark in 1:07:23, including Tom Gröschel, Martin Hicks, Thijs Nijhuis and Russia’s Fedor Shutov, who is an Authorised Neutral Athlete (ANA). The same group of runners were still in the lead at the 30k mark (1:35:33) and at 35k (1:51:17). Shutov was running two seconds behind though at 35k and then dropped back.

Between 35 and 40k Tom Gröschel and Malcom Hicks pushed the pace and managed to seperate themselves from the group. The race was then decided in the last few hundred meters with Tom Gröschel sprinting away to win with 2:13:49. ,“I tried to push the pace in the second half and of course I knew the course from last year which gave me a bit of an advantage at the end,” said Tom Gröschel, who became the second German men’s winner of the Metro Marathon Düsseldorf. Carsten Eich was the winner back in 2004 when he ran 2:14:06.

In the women’s race Hiruni Wijayaratne from Sri Lanka passed the half marathon mark leading in 1:15:50. At that point German runners Anja Scherl and Anna Hahner were in second and third with split times of 1:16:49 and 1:16:50. At the 30k mark Wijayaratne still had a big lead. She passed this point in 1:48:20 with Scherl now running alone in second (1:49:05) and Hahner (1:49:53) following in third position. Wijayaratne then could not keep the lead and was overtaken by Scherl shortly after 35k. However she clocked a Sri Lanka record of 2:34:10. “I was hoping to keep up with Anna first and then tried to push the pace after 25k,” said Anja Scherl.