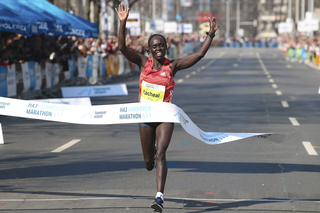 Kenya’s Mwetich ran his marathon debut in fine weather conditions and surprisingly won the race in 2:09:37. Fellow Kenyan Hosea Kipkemboi was second with 2:10:40, Ethiopia’s Debas Alebachew Wale took third place in 2:10:57. Last year’s winner Seboka Negusse of Ethiopia, one of the favourites, dropped out at the 35k mark.

Racheal Mutgaa won the women’s race in a course record time of 2:26:15, improving the former mark by almost a minute. Back in 2013 Ukraine’s Olena Burkovska ran 2:27:07. In a contest that was very close for a long time Kenya’s Mutgaa finished ahead of Ethiopia’s Tigist Memuye Gebeyahu who clocked 2:27:35. Karolina Nadolska of Poland was third in 2:27:43.