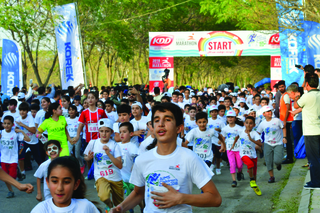 Quito, Ecuador: The chasquis were barefoot running messengers during the Inca civilisation. The second edition of the AIMS Children’s Series Quito was held in honour of these ancestral characters with the title ‘Chasquisito’.

On the morning of 17 June in the “southern tribune”, one the most deprived areas of the city, 1000 children from all over the country experienced an athletic festivity along with their parents and friends. The objective was to create future star athletes that could represent Ecuador internationally and the satisfaction of encouraging a healthy and productive lifestyle through running.

Erbil, Iraqi Kurdistan: On 28 July Erbil Marathon staged the 2018 AIMS Children’s series race. More than 1000 boys and girls aged from 6–13 ran in a 2km race which took place in the Sami Abdulrahman Park — the biggest park in Erbil (formerly an army base).

After last year’s race the children, parents, media and others eagerly anticipated the event. Far more children applied but entries had to be capped at 1000. Fortunately, even those unable to register came to watch with their parents and joined in the fun.

The children were very excited to receive a T-shirt, Cup, sports bag and other gifts provided by the sponsor company. Many of them received their first ever medals. Water was provided all around the course and the children received milk and juice at the finish. There were activities before and after the race such as face painting, warming up and dancing with cartoon characters and clowns.

Several Government officials attended the ceremony including the deputy Governor of Erbil. There was coverage from local and national media agencies including the children’s channel JOJO MAMA who were event partners and aired several reports before and after the event to build awareness.