Looking back on 100 issues of Distance Running 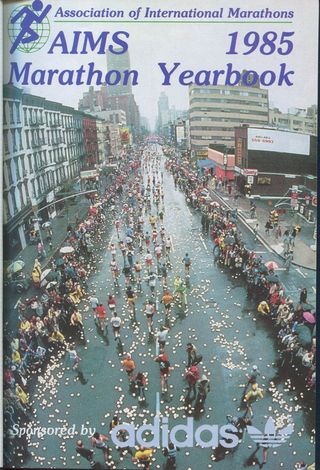 This edition of _Distance Running_ carries the number 100 on the cover. Currently appearing quarterly this would imply coverage of the world of distance running for the last 25 years. But _Distance Running_ has been published quarterly only since 2006 and started out looking very different when it first appeared as the ‘Marathon Yearbook’ 34 years ago.

AIMS was founded in 1982 by 28 marathon organisers from countries all around the world. That year Alberto Salazar beat Dick Beardsley to win the Boston Marathon in 2:08:52. Largest marathons in the world were London with 15,116 runners and New York with 13,599. The fastest women’s time was 2:26:12 by Joan Benoit (later Samuelson) at Eugene. Rosa Mota won the first ever women’s marathon at the European Championships over the classic course from Marathon to Athens.

In 1985, when membership still stood at less than 50 races AIMS started to produce a publication which was at first called the “Marathon Yearbook” in black and white A5 format with a colour cover.

In 1987 the name was changed to the “AIMS Yearbook” after membership was extended to distance races other than marathons at the 1986 World Congress of AIMS in 1986. From 1990 this ‘Yearbook’ was rolled forward by 6 months at a time with two editions a year.

1991/1
At this time New York and London were alternating as the world’s largest marathon with New York at 25797 runners in 1991 to London’s 23393. Koichi Morishita ran the fastest men’s time at the Beppu Marathon and Wanda Panfil topped the women’s list with 2:24:18 in the Boston Marathon.

In September 1992 the title was again changed to “Distance Running” and it went to A4 format. Each edition was 68 pages mainly in black and white. The larger format made it look like a regular magazine for the mass market and it did become more widely circulated to runners through AIMS member races – now numbering around 80 – rather than just to the races.

Runners would find a copy in their finisher’s bag after completing an AIMS member race or pick up a copy at the race expo beforehand – it was up to the race organisers whether to place a bulk order at the time of their race and they could distribute it in whatever way they thought appropriate.

The magazine stayed this way until edition 1 of 2001 when it went to three editions per year and was printed in full colour throughout. AIMS membership was 158 and embarked on a sustained surge which has continued to date almost unchecked.

Distance Running was from its inception seen as the main platform for AIMS to promote its members and as membership continued to build – reaching 225 in 2005 – the magazine was made quarterly. Year by year each of the four editions gradually increased in number of pages to accommodate the increased membership.

2009
The New York Marathon had now established itself as unquestionably the world’s largest marathon with 43,633 finishers – well ahead of London’s 35,251. Fastest times of the year were 2:04:27 run by Duncan Kibet in Rotterdam and 2:22:11 by Irina Mikitenko in London.

As membership numbers crept inexorably upward, reaching 300 in 2010 and 400 in 2015. In 2012 Distance Running changed from stapling the pages to using a ‘perfect’ binding. It first went online late in 2010 on a specifically dedicated Distance Running website. This was eventually merged into the AIMS site in 2017.

2019
Despite its radical transformation in terms of size, frequency of publication and quality of production Distance Running remains true to its essential nature – a distance running yearbook that is rolled forward every three months. 400,000 copies are circulated annually with a readership of 1.2 million in 126 countries worldwide.

It contains the basics on AIMS member events (contact details and race dates) wrapped around with news items, race previews and ads presented in the most eye-catching style. Opening up this 100th edition you would have been hit by a riot of colour on every page as if testifying to the vitality of the running movement, AIMS and its members.