“On 14 October the whole city lives the marathon…” 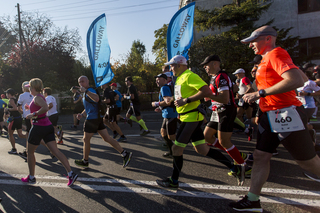 With 6000 runners and wheelchair competitors PKO Poznań Marathon is one of the largest marathons in Poland and it is expected to be more popular than ever, with both local and foreign athletes, for the 20th anniversary edition.

Poznan, in the western part of the country about 260km from Berlin, is the fifth largest city in Poland.

The route leads you through the most interesting corners of the city close to the centre and includes pleasant stretches through the city’s parks. It has long straight sections, a good surface and thousands of supporters along its entire length shouting and supporting tired marathoners. There are refreshment points every 5km which offer fruit, sugar, chocolate, isotonics and water. Group pacers help steer you to target times of your choice from 3–5 hours and every 15-minute intervals between.

The registration pack includes a special ecological bag and a running gadget, bib number with safety pins, timing chip, high-quality technical t-shirt, a non-alcoholic beer and other products from sponsors. The t-shirt from 2017 scooped the top award at the AIMS Congress in Tallinn. A special jubilee medal awaits runners at the finish line followed by fruits, chocolate, isotonics, water, beer, tea and a pasta party. On 14 October the whole city lives the marathon, so you will need more time if you want to see the rest of the city’s attractions like Lake Malta with its sports infrastructure or the beautiful lively Old Market Square with its colourful terraces.

The race office at the Poznań International Fair is open on 18–19 October from 10.00–20.00 for you to pick up your start package. The start and finish are in the same place and the race expo is held just alongside.

Contact us at: info@marathon.poznan.pl or on facebook Poznań Marathon. Enter through the website www.marathon.poznan.pl
Registration fees are $32 until 30 April but then go up in stages every few weeks. Entering at the expo itself is $60.