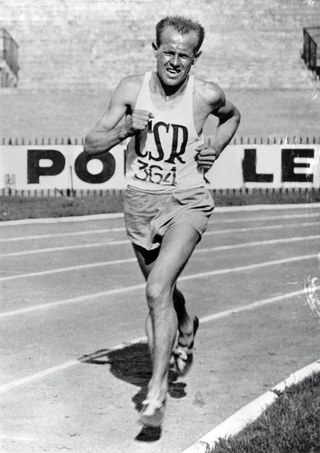 Emil Zatopek’s Marathon career was restricted to just two races and one victory but that victory was part of his unique feat of winning all three ‘distance running’ gold medals at the 1952 Helsinki Olympic Games. No one else had done this before or has done since.

Zátopek was born on 19 September 1921 and grew up in the Czech village of Kopřivnice, one of seven children. He had an active childhood but there was nothing to hint at his talent for running. Leaving school at 14 at age 16 he moved to the town of Zlín for menial work at the Bata shoe factory. In May 1941, before the war had made much impact in Zlín, the factory managers organised a cross country race for promotional purposes and press-ganged about 100 employees into running. Despite his reluctance the now 18-year old Zátopek had his competitive instinct roused sufficiently to finish a disappointed second and become drawn into the factory training group.

A year later the highly repressive ‘German Protectorate of Bohemia and Moravia’ was instituted and the Czech Government went into exile. The Zlin factory was put on a war footing. A newly-graduated lawyer, Jan Haluza, joined the factory inspectorate and also the training group.

Haluza was Zátopek’s senior by seven years and a national champion. Zátopek had an enquiring scientific mind; he experimented on himself with his diet and he originated the practice of interval training based on sound physiological principles and on what he had read about the ‘Flying Finns’ who had dominated distance running for a generation. But Haluza provided something beyond conventional coaching: under his influence Zátopek’s performances improved so that he had surpassed his mentor by 1944.

With the end of the war Zátopek was able to compete internationally facilitated by his joining the Army just days after the war ended. He ran the 5000m in the 1946 European Championships in Oslo and finished fifth in a new national record. Inter-country matches provided a platform for Zátopek to improve his performances in 1947 – he was unbeaten in 12 races – but it was towards the 1948 Olympics in London that Zátopek’s attention was focussed. In the immediate build-up to the Games he debuted at 10,000m and in his next race fell only two seconds short of the world record.

In the 10,000m Zátopek was 80m down after six laps but had surged into the lead by 4000m. He won by 300m in a time of 29:59.4. The 5000m required qualification through heats and Zátopek was unwisely drawn into fierce contest for a meaningless first place. It showed in the final where, entering the last lap 40m down and in third place, he fell one metre short of catching the winner, Belgium’s Gaston Reiff.

He continued to dominate the long-distance track events and extended his repertoire to include two oddity track distances in which he set world records: one hour and 20,000m. This set others, and eventually Zátopek himself, to thinking about adding the Marathon to the events he would contest at the 1952 Olympics in Helsinki.

He won the 10,000m title with a relentless battle of attrition that dropped all his opponents with four laps to go. His 5000m victory came with a lightning last lap in which he stormed past three rivals on the final bend. As a marathon debutant he adopted the tactical expedient of tailing the world record holder Jim Peters but Peters cramped after halfway. By 30km Zátopek had outpaced everyone else and went on to win by two minutes in a new Olympic record – as his times in the 5000m and 10,000m had been.

At the 1956 Olympics in Melbourne Zátopek contested only the Marathon but had lost training through injury and could manage only sixth. He retired from competition in 1957.

Throughout his athletic career Zátopek was inevitably used for propaganda purposes by the Czech Communist Party. He tolerated this as a tax on his athletic success but was more of a democratic nationalist by inclination. He publicly supported the ‘Prague Spring’ reforms of Alexander Dubček in 1968 and as a result was thrown out of the army and assigned lowly employment outside of Prague. Although allowed back to Prague in 1977 he was kept in a menial job until his retirement five years later. He had to await the ‘Velvet Revolution’ of 1989 before he was ‘rehabilitated’ by President Václav Havel a few months later.

Zátopek found a new role in 1995 by helping Carlo Capalbo to establish the Prague Marathon, which nowadays enjoys a great popularity among runners worldwide and this year celebrates its 25th anniversary on Sunday 5 May. Emil Zátopek was a great supporter of the race until he died from complications following a stroke on 22 November 2000, aged 78.