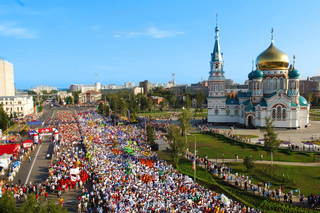 Siberia – for many people a byword for the cold – will surprise you. The Siberian city of Omsk is one of the sunniest cities not only in Russia but comparable to Cyprus, Monaco or Morocco. The sun shines 308 days a year and brings people happiness and joy with its gentle rays.

According to legend the energy centre of the planet lies in the north of the Omsk Region, which the locals call “the navel of the world”. An ancient civilization is supposed to have lived here but was destroyed by a global cataclysm.

In 1716, Peter the Great built a military fortification at the confluence of the Siberian rivers Irtysh and Om to start the eventful and rich history of Omsk. In late 1918, during the Civil War, it was declared the capital of Russia by Admiral Alexander Kolchak, the Supreme Commander of the Russian Army. Omsk held most of the gold reserves of the country until early 1920.

This is the land that in 1990 established the Siberian International Marathon (SIM). The race grew rapidly and became an AIMS member the following year. In the mid-90s it became the leader among Russian marathons in terms of the quality of organisation, the number of participants, the prize purse and the performance of the winners. It quickly became another attraction for people from various cities of Russia and the world.

Among those who visited Siberia, Omsk and SIM in those early years were Fred Lebow (founder of the New York City Marathon), Bill Burke (Director of the Los Angeles Marathon) and Hugh Jones (winner of the London Marathon and secretary of AIMS). SIM was later visited by AIMS President Paco Borao and Horst Milde, founder of the Berlin Marathon.

The marathon starts and finishes in the Central Cathedral Square. It passes through the historical part of the city and along the beautiful embankments of the River Irtysh. The course is flat and offers fast running to people seeking to set personal records.

In 2003 Omsk became the only Russian city to have a marathon runner monument at the start and finish of the marathon; the statue of the athlete symbolises the eternal longing for victory. Winners of the SIM are awarded small copies of this monument every year.

In 2010, in celebration of the 2,500th anniversary of the Legend of Marathon, SIM received a deputation from the town of Marathon bearing the Marathon Flame: a symbol of world peace spreading the ideals of the Marathon all around the world. Many famous Omsk athletes – Russian, European and Olympic champions – carried the torch through the streets of Omsk.

Omsk is today a million-plus metropolis stretching 40km along the river Irtysh and one of the biggest industrial, scientific, cultural and sports centres of Russia. It has a 300-year history and rich cultural heritage, old architecture, but the most attractive feature of Omsk is the inexhaustible kindness, cordiality and Siberian hospitality of its citizens.

A three-hour flight from Moscow or a two-day train ride on the legendary Trans-Siberian Railway and you will be genially welcomed to the 30th anniversary race on 3 August with an interesting tourist programme – because this weekend is when the city traditionally celebrates its birthday. Coming to Omsk and participating in the SIM guarantees a fascinating experience.