Race with a view 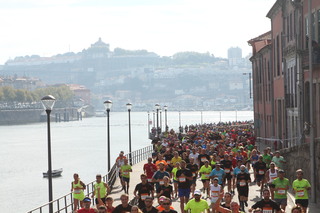 Porto Half Marathon has been run annually in the city of Oporto, Portugal since 2007 and hosts thousands of runners from around the world. Apart from the Half Marathon there is also a 6km Mini Marathon with over 11,000 runners.

Porto is one of Europe’s oldest tourist destinations. It was proclaimed a World Heritage Site by UNESCO in 1996 and was voted Best European Destination in 2012, 2014 and 2017. Its cultural, architectural and artistic wealth, its port wine and gastronomy, outdoor leisure areas and cultural life are just some of the reasons to visit.

With breath-taking scenery along the banks of the Douro River the race offers a flat and fast course which passes through the two neighbouring cities of Porto and Vila Nova de Gaia. The Porto Half Marathon course showcases the area at its best, passing through the historic city centre, Ribeira do Porto, crossing the D. Luís bridge and going past the famous wine cellars of Porto.

This stunning course attracts thousands of athletes each year, among whom rank some major figures of world athletics. Samuel Wanjiru participated in the Porto Half Marathon less than a month after breaking the Olympic record in the Beijing Olympic Marathon and took first place in 2008 and 2013. Multiple world half marathon champion Zersenay Tadese presented himself in Porto for the 2011. Haile Gebrselassie managed to beat the Kenyan peloton in 2009 when winning the race with 1:00:04. Multiple world cross-country champion Paul Tergat made his debut in the first edition three years after setting a Marathon world record.

Porto Half Marathon’s course gives all runners the chance to break personal best times. Besides the joy and cheering of the spectators, the food and water points and live musical animation throughout the course provides runners with high quality service and a unique experience.

There is an alternative for those not yet ready to compete at the half marathon distance. The 6km Mini Marathon allows participants to spend a beautiful morning with family and friends.

The Porto Half Marathon is increasing its international participation with runners coming from more than 50 countries on five continents. Last year foreign runners made up more than a sixth of the field.

For runners who do not stay in the city long enough to get to know its most beautiful nooks and crannies we suggest using the race to appreciate the best that the region has to offer. The half marathon course unites the two neighbouring municipalities and takes place mainly along the banks of the Douro river.

Come run the 13th Porto Half Marathon and enjoy this amazing city.

See the latest news from Porto Half Marathon