Run in a friendly Boston qualifier among pristine river vistas 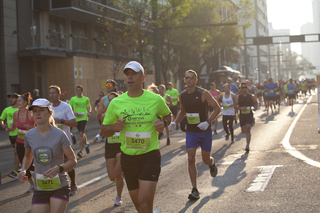 Join us in Alberta's “Festival City” where the excitement starts and ends at Race Headquarters located in the Edmonton Convention Centre.

The Servus Edmonton Marathon was named winner of the Edmonton Journal’s 2018 Readers’ Choice Awards This race is approachable, accessible and fun, with past participants saying it is one of the friendliest Boston qualifiers out there. With designated cheer stations, a spectator-friendly course design and energetic volunteers, runners feel extra motivation to achieve their personal bests. Many first-time marathoners come to Edmonton because the race crew stays at the finish line until the very last runner comes through.

The Servus Edmonton Marathon Weekend offers something for everyone, starting with the ABC Kids Event on Saturday 18 August. Held at Re/Max Field, just a short distance from Race HQ, hundreds of kids and their parents participate in fun athletic activities, then run or walk one kilometre around the ball park. Mascots, face painters, and bouncy castles make this event a great way to spend Saturday afternoon.

Sunday is race day and features the Marathon Walk, Marathon Run, Half Marathon, 5K and the Army 10K Run, which joins together members of Canada’s military community with runners from around the world. The race effects a full closure on Jasper Avenue, the historic trade route through downtown Edmonton.

There are a whole host of other activities and special events planned around the Servus Edmonton Marathon Weekend, including the Sports Expo, beer garden, post-race brunch, and the annual Friendship Run with John Stanton, founder of Running Room, Canada’s only national running store chain. The event has more than 5000 runners and up to 10,000 spectators and provides exposure to dozens of exhibitors and sponsors.

Edmonton is the fifth largest city in Canada and capital of the province of Alberta. It is the northernmost city in North America with a population of more than one million people. On average Edmonton receives 2,299 hours of bright sunshine per year and is one of Canada’s sunniest cities. Situated along pristine river vistas, Edmonton is home to one of the largest urban parks in the world, the North Saskatchewan River Valley, which is 22 times larger than New York’s Central Park.

The race is proud to be sponsored by Servus Credit Union, a member-owned financial institution serving members from more than 100 locations in 59 communities.