Kenyan athletes Eliud Kipchoge and Gladys Cherono win the 2018 awards at ceremony in Athens, home of the marathon 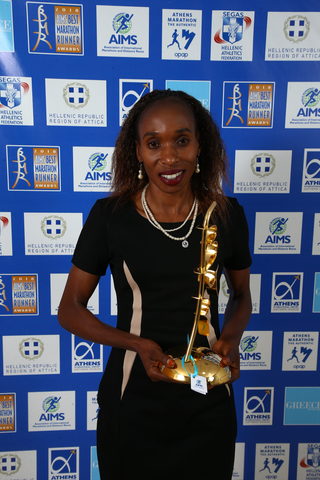 The Association of International Marathons and Distance Races (AIMS) is delighted to announce that the Kenyan athletes Eliud Kipchoge and Gladys Cherono were tonight recognised as the male and female recipients of the AIMS Best Marathon Runner Award for 2018.

Their achievements were honoured in the birth place of the Marathon, Athens, Greece tonight (Friday 9 November 2018) at the sixth annual AIMS Best Marathon Runner (BMR) Gala.

Eliud and Gladys were chosen by the AIMS Athletes’ Nomination Committee as the outstanding candidates during the time period of 1 October 2017 to 30 September 2018.

This is the fourth consecutive year that Eliud Kipchoge (Kenya) has been recognised with the AIMS Best Marathon Runner Award. Eliud, 34, has carried his exceptional form from 2017 into 2018. Eliud is undefeated in the Marathon in 2018, winning both London and Berlin Marathons. His victory in Berlin was in a new world record of 2:01:39. This took 78 seconds off the previous record – more than any other single improvement for over 50 years.

Eliud Kipchoge comments: “I am delighted to be the recipient of the AIMS Best Marathon Runner Award. I am very proud of my achievements this year. I would like to thank AIMS, their members and sponsors for recognising me in this way.”

Gladys Cherono comments: “I am very proud to be in Athens, the home of the Marathon, to receive this award from AIMS on behalf of their members and sponsors. It is a great honour to be recognised in this way.”

AIMS President Paco Borao comments: “Eliud and Gladys have been the outstanding candidates in 2018. It is a great honour to recognise their accomplishments on behalf of our 447 members in front of a gathering of the marathon family here in Athens, Greece.”

The event was co-organised with the Hellenic Athletics Federation (SEGAS), ‘Athens Marathon. The Authentic.’ and the Region of Attica, held under the kind sponsorship of the ‘Greek National Tourism Organisation’ and ‘Athens International Airport’.

There were several other awards presented at the Best Marathon Runner’ Awards Gala. The awards and winners are as follows:

Hiroaki Chosa (88) held the position of President of AIMS between 1991 and 2010, the longest time one person has held the post in the organisation’s 36-year history. He also held many of the highest positions in the Japanese Association of Athletics Federations (JAAF) including Senior Vice President (JAAF). 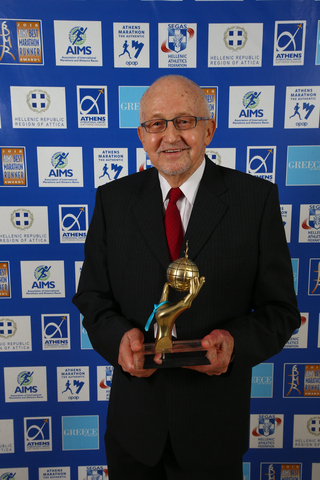 Hiroaki Chosa comments: “It is a great honour to be recognised in this way. I feel deeply humbled to be given this award. I would like to thank everyone at AIMS for choosing to recognise me in this way. Thank you to my wife and family for their support over so many years. Thank you also to all the athletes and men and women managers, staff and volunteers behind the scenes who make running events possible for others to enjoy.”

AIMS President Paco Borao comments: “It is clear that AIMS would not be the world leading running organisation it is today without the hard work, dedication and talent of Hiroaki Chosa and Horst Milde. They are both very well deserving of the AIMS Lifetime Achievement Award.” 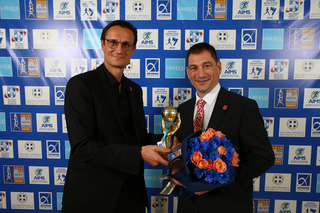 The SwissCityMarathon-Lucerne was presented with the AIMS Green Award for their commitment to good environmental practices. Thanks to the SwissRunners ticket, traveling from all over Switzerland to the event and back is free for participants. The fire hydrants in town are supplied with clean drinking water and this is used for the hydration points serving the runners.

The SwissCityMarathon-Lucerne offer participants the chance to donate towards CO2 compensation upon registering for the race, supporting the Swiss project of forest management operated by the company Oberallmeindkorporation (OAK).

Reto Schorno, CEO of the SwissCity Marathon comments: “It is a great honour to be given this award. We are very proud of our environmental initiatives such as our runners receiving free public transportation and so many of our runners supporting the fostering of forestry. We would like to thank AIMS and its members for presenting us with this award.”

Paco Borao, President of AIMS commented: “Everyone at AIMS is delighted to welcome the SwissCityMarathon-Lucerne to Athens to receive their award. They are on track to succeed in their ambition of hosting a sustainable race for years to come.” 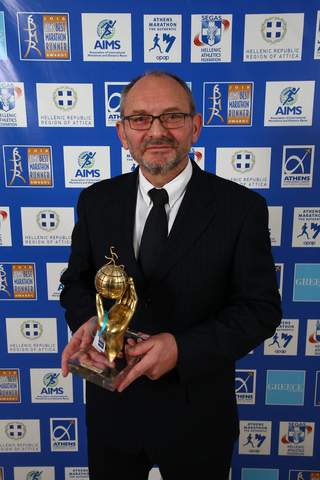 The Belgrade Marathon was the 2018 recipient of the AIMS Social Award in recognition of their work with runners living with disabilities and other social initiatives.

In addition, the Belgrade Marathon support a program called “Mama Fit” which aims to promote education for women about the importance of safe physical activity during and after pregnancy. In 2018, more than 500 pregnant women, new mothers and their families took part in the Belgrade Marathon fun run.

Dejan Nikolic, Race Director of the Belgrade Marathon comments: “The Belgrade Marathon has put a strong focus on social initiatives for many years, especially our work with runners living with disabilities. Our programme Mama Fit has been really well received and shows how sport is a great medium for important social and health messages.”

Paco Borao, President of AIMS, comments: “Races have a great opportunity to bring their entire communities together through participation in our sport. The Belgrade Marathon has been very successful in doing this in recent years with its innovative “Heroes of the Belgrade Marathon” and “Mama Fit” programs and I wish them every success in the future.”