Run a marathon at the North Pole? South Pole too? One on every continent? In the same week? Richard Donovan’s done it all…

To the ends of the Earth 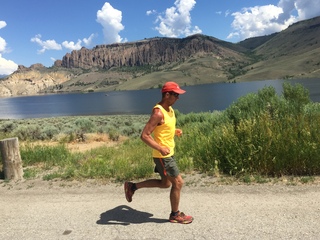 Richard Donovan came up with the idea of holding a Marathon at the North Pole. Putting it into practice was a different story – but even that was only the beginning.

Just getting people up there and then to run on the surface ice of the Arctic Ocean, was a first. The logistics were formidable: Russian paratroopers had to be landed; then tractors air-dropped and a temporary runway built; then a specialist aircraft landed; then tents erected in the world’s most lonely outpost. But that was all done, the race was run in April 2002, and it became an annual event.

Donovan moved on: he became the first runner to complete a marathon at both the North and South Poles. A decade later he completed seven marathon distances on seven continents in seven days. Having done it once he saw a chance to improve his own record: in 2012 he completed the challenge in 4 days, 22 hours, and 3 minutes. That’s from the first step to the last including 43,540km in the air. He snatched some vestiges of sleep on economy flights and carried one bag the entire way. He started at the Russian Novo base in Antarctica, went north to Cape Town, crossed the South Atlantic to Sao Paulo, went further north to Orlando, then east to London before continuing on to Hong Kong and south to Sydney. At one point he wasn’t even able to keep down water, settling for a beer in Sydney as a last-gasp source of carbohydrates.

Again, the achievement was not just physical – it was also a logistical triumph. The more complicated the challenge the more Donovan relishes it. He brings a wealth of experience to any venture, fastidious attention to detail, raw performance and an ability to rapidly adapt when plans can’t run. The philosophy underlining his events is: don’t ask anyone to do what you have not done yourself. Have others follow with the benefit of your own direct experience.

So it was not surprising that he turned his own personal accomplishment into the epic World Marathon Challenge, or 7/7/7: The rules are simply to travel to all seven continents within 168 hours and run the marathon distance on each of them during that period. He has a 100% success rate in making that happen for participants.

For Donovan extreme running is also a meditation; a journey across the mind during which we meet the mental barriers we have placed for ourselves – and overcome them. Those barriers are often born from a lack of confidence.

“As the distances lengthen you find that women are just as good as men and older men often beat men in their twenties,” he says. “Perseverance, managing physical and mental resources, pacing yourself: the older you get the better you get at all of that.”

He views today’s digitally-enclosed lifestyle as no longer offering transformative experiences. People want a real adventure and his races provide that in often starkly beautiful arenas. The Volcano Marathon takes place under an almost touchable Milky Way in the Atacama Desert. It is the highest desert marathon in the world. He organises the only official marathon inside the Antarctic Circle, the Antarctic Ice Marathon & 100km (the southernmost marathon and ultra-marathon).

He believes his events are for everybody willing to do the right training and encourages people to participate. The resulting experience usually defies everyone’s expectations.

His races, inherently expensive and limited in the number of participants that can be accepted, have attained a kind of cult status. It’s not just for the running but for the sense of exploration. He brings people to a place where time doesn’t exist, and what people achieve there is never quite the same for everyone. Competitors come from all kinds of backgrounds and their reasons for competing vary. “You don’t have to be an expert, and the right time to do anything will never arrive on its own.”

He has run the Sahara Desert, Mount Everest and the Inca Trail, and an epic endurance run in the Amazon jungle. Donovan’s recent achievements include three transcontinental runs: San Francisco to New York (2015), Istanbul to Rotterdam (2016), and Buenos Aires across the Andes (2017). Life looks different when viewed at running pace rather than out of a car window: “Seeing such a vast country unfold on foot you notice everything, the way everything changes,” he says.

Donovan has served the sport in other ways. He organised the 2011 Trail World Championships in Connemara (IRL) for which both he and his two-time Olympian brother Paul received an Order of Merit from the IAU. He was also race director for two Commonwealth Championships in ultra-running and has personally sponsored Irish teams at the European and World Championships. A picture emerges of a visionary, expert and mentor: someone people would follow to the ends of the Earth.