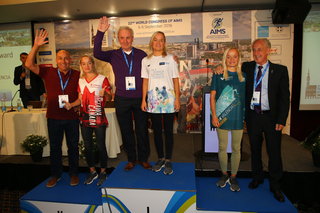 Fred Lebow, founder of the New York City Marathon and one of the founding fathers of AIMS, famously advised: “never underestimate the power of a T-shirt’ – but going by the size of today’s race T-shirt market, he may have done so himself.

Fred was remarking on the psychological power of a T-shirt to bind people to a cause or a specific purpose rather than the economic power to be won by success in manufacturing and marketing to millions of runners all over the world – but from one flows the other.

At the inaugural World Best T-Shirt & Medal Competition, held at the 22nd AIMS World Congress in Tallinn 2018 on 8 September 2018, it was revealed that purchasing costs to AIMS members every year amount to $27 million for T-shirts and $12 million for medals.

Wholesale prices to race organisers ranged widely but on average were $6 per T-shirt and $2.5 per medal. T-shirt costs ranged from $2–$10 and for medals $1 to a whopping $30.

The competition met with enthusiastic support and will be a permanent part of the AIMS Congress programme in the future. 116 AIMS members submitted T-shirts and 143 submitted medals with entrants from nearly every country in AIMS membership throughout the six continents. Most were submitted in person at Congress but about 20% came as postal entries. This keen interest to participate seemed to point to the pride members placed in their products.

Leila, Liina and Lily Luik, the triplets who represented Estonia in the 2016 Rio de Janeiro Olympic Marathon, modelled the T-shirts and medals.

Of particular interest among the items submitted were medals individually hand-made by local artisans using local materials for the Ravenna Marathon “Citta del’Arte”. The Hans Christian Andersen Marathon gave out medals in successive years which assembled into a 5-piece jigsaw. Tiffany necklaces were given to Nagoya Women’s Marathon participants. Munich, with its ‘City of Heart’ motto provides heart-shaped medals. Very often varied and inventive use of materials, colours and designs for ribbons enhanced the presentation of the medals themselves.

In place of a T-shirt – of limited use in sub-zero temperatures – the Siberia Ice Half Marathon provides a fur hat and mittens while Maui Oceanfront Marathon prefers to offer a traditional skirt-like garment as better suited to tropical conditions.

Valencia Marathon’s T-shirt, once wet with moisture (sweat or rain) only then reveals a map of the course. In India the Satara Hills Half Marathon distributes a Marvel Comics running cape in lieu of a T-shirt.

Designs for both Marathon T-shirts and medals generally employ motifs which reflect the city, and particularly local historic landmarks. Some races keep the same design for continuity but others make a point of changing every year; some always incorporate their national flags or colours but others use more international or abstracted designs.

The Mumbai Marathon medal design allows both one for the finisher and one for their nominated partner who has done most to help get them to the finish line. This could be a means towards rapidly doubling the size of the medal market – never underestimate.