Is running at the North Pole the world’s coolest marathon? 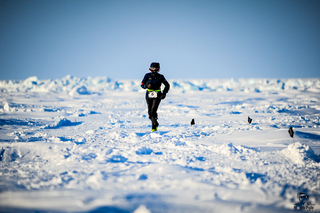 With –40ºC temperatures, armed guards to keep polar bears away from runners and running on top of the frozen Arctic Ocean the FWD North Pole Marathon is something entirely different.

Entrants must endure extreme cold and have the nerve to run on ice floes with only 2–3m separating them from 4000m of Arctic Ocean. You might think there would be few takers but the race reaches capacity every year.

It appeals to people of all shapes and sizes, abilities, ages, and nationalities. Richard Donovan, an Irish ultra runner and former economist, who established the event in 2002, claims that “anyone who can comfortably complete a marathon on the road can do it at the North Pole, it’s just that they won’t be setting a personal best. The underfoot terrain is very trying. Every step is energy sapping, like running on sand. Then there’s the cold, that really slows you down.”

The oldest competitor in the 16 editions of the race has been 78-year-old Michel Ribet of France. There have been three blind runners among the 552 people from 55 countries who have successfully completed the race (535 in the marathon and 17 the half marathon. The success rate is close to 100%.

Race logistics do not involve traffic management. Instead, Russian paratroopers set up a camp by first locating an ice floe of a certain maturity that’s robust enough for a plane to land. Then they fly over the over the North Pole on an Ilyushin cargo plane to airdrop personnel and a tractor to flatten a runway on the sea ice. Finally they build a temporary ice camp of tents.

This is all done following the spring equinox when the North Pole shifts from constant darkness to six months of constant daylight. The sun doesn’t set at all – it just circles the sky. Donovan jokes that the race cut-off is before it gets dark.

The North Pole camp is then used by scientists and other adventurers over a two-week duration before the ice becomes unstable, breaks up, and the North Pole season is over.

To run the race, marathon participants must first get to the Norwegian archipelago of Svalbard (direct flights to Oslo). Following briefings and gear checks, it is a two-and-a-half hour flight in an Antonov jet to the ice camp for a 48-hour stay in which, apart from running the marathon, participants are flown by helicopter to the exact North Pole (90 Degrees North Pole). The race field is determined by the airplane capacity, which, using two flights, means about 50–60 runners.

“The course is floating around on the ocean”, says Donovan, “so when people look at their GPS they see the entire route has moved during the race”. For safety the course is typically eight laps of a meandering loop.

Runners need layers of light clothing: a base layer, fleece and wind jacket along with balaclava, goggles, mittens and trail shoes. The layers are effective for warmth but light enough for the exertions of a marathon. Conditions and times vary widely. The men’s record of 3:36:10 was set by Thomas Maguire (IRL) in 2007. The women’s record of 4:52:45 was set by Anne-Marie Flammersfeld (GER) in 2014. Paul Grealish (IRL) has run six North Pole Marathons – the most by any one person.

Those completing the North Pole Marathon are eligible to join the exclusive Marathon Grand Slam Club by finishing a marathon on each of the seven continents and at the North Pole. It’s a race truly deserving of its tagline ‘the World’s Coolest Marathon’.