The story of 1000km told by its founder

My passion, your pride 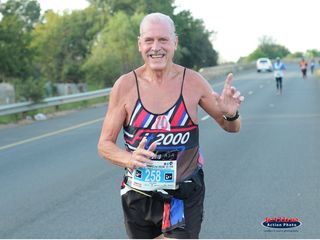 Can you remember your first ever road race? My first event not only changed my life but eventually also changed the shape of the worldwide market in running medals.

I immigrated to South Africa from the UK to set up an engineering business, which did well. We entered a team for an inaugural company relay. Those of you who have participated in such an event will know that these things are often more of a party than a foot race but I still remember suffering as I limped through the 11.3kms allotted to me.

Next was the Johannesburg Marathon – just 3 months later. I should have realised that sane people do not run marathons so soon after their first steps. But it was the first of nearly 700 marathons I have completed.

During the 1980s, only big events handed out medals. Having run my heart out for four hours I expected to receive something better than a cheap and nasty piece of metal. I decided that I should get involved in making medals so that it would be possible for runners to receive something rather more substantial and commensurate with the effort of running a marathon.

Thousands of runners attended races every week during their build up to the Comrades Marathon and clocked up hundreds of racing miles. In 1990 I founded the “1000km Challenge” to reward athletes for their dedication and commitment to participate in races totalling an aggregate of more than 1000km each year: 1000km Promotions was born.

The acid test for the medals that we supplied was whether I would be happy receiving such a medal when completing the event myself. This became the bar set for all medals that we produce until this day.

Because the South African market was limited we needed to expand internationally. I approached events such as the London, Berlin and Vienna City Marathons. We teamed up with Metal Badge in Pretoria who today own 1000km. At that time Alan Storey, a world-renowned coach and General Manager of the London Marathon, had been offered any medal from his existing supplier provided it was round, two inches (5cm) in diameter, flat and gold-looking. I offered something completely different with an oblong, modelled antique bronze medal which generated a “wow” factor among runners – something which we have tried to achieve ever since.

Since those early days I have always kept one eye on what our competition are doing while looking out for new ideas to keep us at the forefront of technology. We have innovated many manufacturing processes including modelled and cut-out medals with unique ribbon fitting systems. More recently, two- and three-tone medals which can now be produced in virtually any colour. With as many as 23 manufacturing steps involved a workforce of around 150 is employed at our South African factory near Pretoria.

From 1990-2010 I set myself the challenge of completing 50,000km in official road races – an average of 50km a week for 20 years. Whilst continuing to develop new medals I focused on charity work and raised over 500,000 rand through events such as a “Back-to-Back Comrades” in 1999, the “Cancer Chain of Hope” in 2000 and the London Marathon “1000 miles in 1000 hours” challenge in 2003 at which AIMS Secretary Hugh Jones was one of the enforcers making sure everything was done by the book.

In business Makis Asimakopoulos, of Athens Marathon – The Authentic, and I developed a special medal for the 2500th anniversary of the Battle of Marathon of which tens of thousands were sold for charity. Production often begins with a simple idea and I use my 30 years of experience to interpret and develop it into a workable design. Another example of this is the finishers’ medal modelled from a sculpture by Leonardo Lustig for the Midnight Sun Marathon.

In 2008 I broke my ankle during a short training run in the UK. After running marathons twice every weekend for 20 years I suddenly realised with horror that I had run through my middle age and had become an old man.

Ten years have elapsed since that fateful run. I have had half a dozen medical interventions and a bout with cancer – but I am back on the road. My desire to assist marathon organisers to procure the best medals available is undimmed, and also to notch up many more marathons myself.

The next Comrades Marathon, which would be my 25th, is on 9 June 2019 – which is also my 73rd birthday; no surprise where I will be on that date. People ask why at 72 years of age I am still actively involved in medal production. My answer is that it is simply an extension of the passion that I have for my running. I hope that when you source your medals from us you will feel something of that pride.