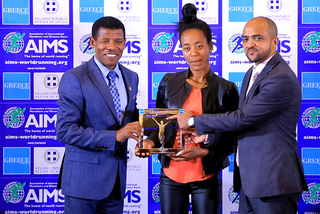 AIMS is delighted to announce that the AIMS World Record Award has been presented to Ethiopia's Netsanet Gudeta in recognition of her “women-only” Half Marathon World Record of 1:06:11 set at the IAAF/Trinidad Alfonso World Half Marathon Championships Valencia 2018 on 24 March 2018.

Netsanet beat the previous record of 1:06:25 set by Lornah Kiplagat (Kenya), a record that has stood since 2007.

Netsanet Gudeta commented: “It is very special for me to receive this award in Ethiopia.” Ermias Ayele, race director of the Great Ethiopian Run, said: “We are very proud, on behalf of AIMS, to welcome Netsanet to our race and host her presentation here. Netsanet is an inspiration to women and girls in Ethiopia and the entire world.”