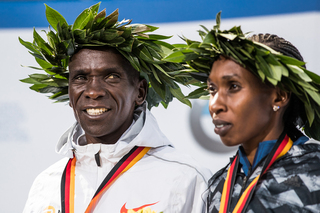 The AIMS Athletes’ Nomination Committee decided that for this year (1 October 2017 to 30 September 2018) Eliud Kipchoge and Gladys Cherono were the outstanding male and female candidates for the AIMS ‘Best Marathon Runner’ Awards based upon their performances.

Eliud Kipchoge (KEN) is undefeated in the Marathon in 2018, winning both London and Berlin Marathons. His victory in Berlin was in a new world record of 2:01:39. This took 78 seconds off the previous record – more than any other single improvement for over 50 years.

The achievements of the two Kenyan athletes will receive global recognition during the AIMS ‘Best Marathon Runner’ Awards Gala in Athens, Greece on the night of Friday 9 November 2018. The event is co-organised with the Hellenic Athletics Federation (SEGAS), ‘Athens Marathon. The Authentic.’ and the Region of Attica, held under the kind sponsorship of the ‘Greek National Tourism Organisation’ and ‘Athens International Airport’.