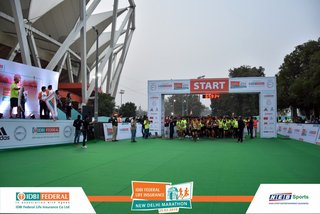 The IDBI Federal Life Insurance New Delhi Marathon, held on the last Sunday of February, is one of the most popular in India. The marathon incorporates the National Marathon Championships and is a qualifier for international events.

With cool, pleasant February weather, a flat course and great camaraderie the marathon is eagerly awaited by thousands of runners in the nation’s capital, many of whom target it to set personal best times. Runners also look forward to running the marathon’s special route, starts off at Jawaharlal Nehru Stadium and winds its way past historic landmarks like India Gate, Rashtrapati Bhavan and Rajpath.

In the 3rd edition held in 2018 over 15,000 enthusiastic runners were flagged off at the starting line by cricketing legend and brand ambassador Sachin Tendulkar. Of these 1500 runners attempted the Marathon, 5500 participated the half Marathon, and 4000 entered the timed 10km run while another 4000 enjoyed the 5K Swacch Bharat Run.

This included a total of 65 elite Indian athletes, headlined by Rio Olympians Nitendra Singh Rawat and Gopi T in the men’s category, and national-level marathoners, Monika Athare and Jyoti Gawate in the women’s category.

Runners participating in the marathon gave back to the community by supporting the official NGO partner – ‘Diksha’, a non-profit school established to provide free and quality education to children from low-income families. Around 50 kids from Diksha also ran the the 5K Swacch Bharat Run.
Another team of kids who participated and inspired fellow runners were from the Sneha Charitable Trust. These kids are attempting to fight their HIV genes by running and proving to the world that with the right determination, everyone can run and stay fit.

The race tried to observe ‘zero food wastage’ by bringing in the Robin Hood Army, a volunteer-based organisation, to transfer surplus food from the Marathon to the needy. The organisers also teamed up with the ‘Delhi Commission for Women’ who ran to promote ‘Strict Punishment for Child Rapists’.

Over 700 volunteers were deployed to help runners along the route. Two hundred doctors attended to ensure an incident-free race along with over 300 policemen and 500+ support staff. Twelve ambulances were on emergency standby and there were aid stations located at every kilometre along the course to provide runners with water and energy drinks. All runners were offered a nutritious post-race breakfast at the Jawaharlal Nehru Stadium.

The 4th edition of the IDBI Federal Life Insurance New Delhi Marathon will be on 24 February 2019. To register visit: http://newdelhimarathon.com/