A “living museum” with the dynamic buzz of a modern city 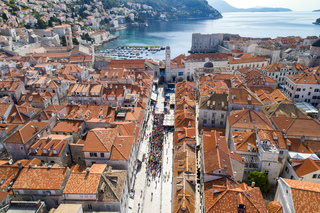 Dubrovnik rests in the southernmost part of Croatia and is one of the most attractive destinations anywhere in the Mediterranean.

The city walls stretch 2km around the Old Town enclosing numerous fortresses, towers, palaces, museums, churches and monuments which set the stage for many cultural events. The Old Town is a popular cultural destination and feels a bit like a living museum but you will find that it also has its own vibrant present and the dynamics of a modern European city.

Dubrovnik has become increasingly well-known as an active holiday destination, thanks largely to Du Motion – Runners’ Days Dubrovnik, a fully-fledged international multi-day sports and recreational event. It offers as many as four races: the now globally popular Dubrovnik Half Marathon, a 5K charity race, the extraordinarily attractive Run The Wall race along the medieval city walls and the Kids’ Day race for children. There are accompanying attractions such as the Du Motion Expo – the gathering place for runners and exhibitors – and Du Motion Chat – a series of talks by prominent commentators from the running world. Du Motion very quickly placed itself among the most successful and best organised running events in the region and was awarded five stars for quality and safety by the European Athletics Association.

Excellent atmosphere, plentiful volunteers and interesting panoramic routes that explore the Old City and Dubrovnik’s coast are the main highlights of this boutique running festival. The start and finish of all four races is on the famous Stradun, a beloved city promenade in the heart of Old Town, well known as a UNESCO World Heritage Site.

Runners’ goody bags contain a variety of items whose worth exceeds the registration fee and include numerous tourist and entertainment extras such as free entry to the Dubrovnik walls, museums, excursions and other discounts and surprises. This helps to ensure that runners have a wonderful time in the city and explore its many beauties.

Runners from 55 countries and of all age groups come to run in Du Motion’s races, many of them returning to Dubrovnik year after year. This is why it proudly carries the title of the most international race in Croatia.

Du Motion turns 5 in 2019 and invites all runners to join the celebration on 27–28 April. It’s a runners’ party you really shouldn’t miss.