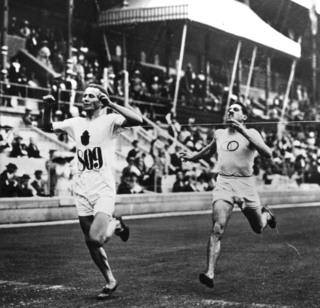 Juho Pietari “Hannes” Kolehmainen was the prototype ‘Flying Finn’ – an appellation bestowed upon a generation of Finnish runners inspired by his pioneering example in the years just before World War I.

The original Olympic Marathon winner Spiridon Louis and the ‘gallant loser’ in the 1908 London Olympics Dorando Pietri (who turned professional to tour the US in an exhausting and ultimately destructive series of re-matches against former Olympic rivals) established their place in athletics history. A century later no other names from that era have remained recognisable to the informed public but Kolehmainen generated a legacy greater than any distance runner that had preceded him.

The 1912 Stockholm Olympic Games in neighbouring Sweden was where he achieved his greatest successes: gold medals at 5000m (14:36.6), 10000m (31:20.8); and in the cross-country event. He also won silver in the cross-country team event. His 5000m victory was what stuck in the memory most: a head-to-head duel with the Frenchman Jean Bouin. After leading the field together for most of the race Kolehmainen only kicked clear in the final few metres, in a new world record time.

In a foretaste of what happened in the 1936 Berlin Olympics (when a Korean, Sohn Kee-chung won the Marathon competing under the Japanese flag and a Japanese name, Son Kitei), the Russian flag was raised for Kolehmainen’s victories. Although there was a separate Finnish team at the Olympics Finland was still part of Russia.

Kolehmainen was a vegetarian by choice and bricklayer by trade – both parts of his life which involved constant self-discipline. He was from a sporting family from Kuopio in central Finland and his brothers William and Tatu were also good long-distance runners. Tatu finished 10th in the 1920 Olympic Games Marathon. But as well as any individual traits or genetic predisposition towards athletic success there was held to be something in the Finnish character which helped to maximise physical performance, particularly in endurance events.

Sisu is a mixture of stoic determination, tenacity of purpose, grit, bravery, resilience and hardiness. The nearest English adjective, equally pithy, would be “gutsy”. It describes situations in which success is achieved against the odds by dint of courage and resolution against adversity, and drawing on inner strength.

The Finnish people saw Kolehmainen’s performances in Stockholm as a perfect example of sisu. While his sporting career was stalled by the First World War the impact of his Olympic performances lived on.

So did Kolehmainen, but after World War I his focus was on the longer distances – particularly the marathon. At the first post-war Olympic Games, held in Antwerp in 1920, he won Marathon gold in a time of 2:32:35.8 – a new world record despite the Antwerp course, at 42.75km, having been significantly longer than at any other Olympics.

Back in 1912 Paavo Nurmi had been one among many aspiring Finnish runners inspired by Kolehmainen’s Olympic feats. Eight years younger than Kolehmainen and aged only 15 he began a strict training programme which flourished during his military service. In the build-up to his international debut at the 1920 Summer Olympics he set several national records and went on to win the Olympic 5000m.

In all Nurmi set 22 world records at distances between 1500m and 20km and won nine gold and three silver medals in his twelve events in the Olympic Games between 1920–1928. At his peak Nurmi was undefeated for 121 races at distances from 800 m upwards. Throughout his 14-year career he remained unbeaten in cross country events and the 10,000m.

At the 1924 Olympic Games in Paris Kolehmainen entered the Marathon but did not complete the race. Nurmi won five gold medals and although he is by far the better known of the two Finns he never ran a Marathon. His plans to compete in the 1932 Los Angeles Olympic Marathon were thwarted by the IOC questioning his amateur status and rejecting his entry only two days before the race. The ruling was confirmed in 1934 and he retired from athletics.

Kolehmainen inspired not only Nurmi but many other “Flying Finns” including Nurmi’s rivals Ville Ritola and Edvin Wide. Together with Nurmi he lit the Olympic Flame at the 1952 Summer Olympics in Helsinki. He died in that same city fourteen years later.