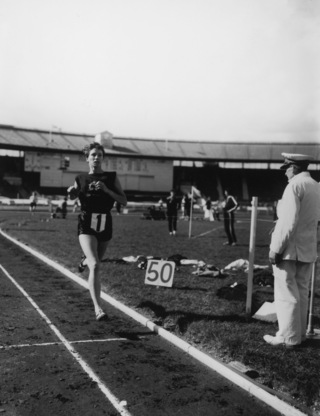 On 29 May 1954 Diane Leather became the first woman to run a mile in less than five minutes.

Only 23 days earlier her fellow Briton Roger Bannister had become the first man to run a sub 4-minute mile just 100 km away on Oxford University’s Iffley Road track. While news of Bannister’s feat reverberated around the sporting world Leather’s achievement met only limited acclaim: “There was a bit of attention,” she told a journalist 60 years later, “at least locally.”

There were further contrasts between the two barrier-breaking performances: while Bannister had been assiduously paced for three-quarters of what could only be described as a time trial Leather had broken her mark in open competition at the Midlands Counties Women’s AAA Championships at Birmingham’s Alexander Sports Ground. Like Bannister she ducked under her ‘barrier’ by tenths of a second but her lap times had fluctuated wildly. She opened with a speedy 68.8 seconds but followed it with laps of 78.2 and 81.6 seconds before finishing with a 71-second lap to record a time of 4:59.6. Earlier that afternoon she had run the 800m event.

Leather was born in a Staffordshire village north of Birmingham, one of six children but the only daughter of Mabel (nee Barringer) and James Leather, a surgeon. As a schoolgirl she played lacrosse but, after moving to the University of Birmingham as an analytical chemist, the 1952 Summer Olympics sparked her interest in athletics. She joined a local running club, Birchfield Harriers, where a club coach, Doris Nelson Neal, recognised her talent at the longer distances.

Neal sought to concentrate on the longer events despite nothing beyond 200m being part of the Olympic schedule. The women’s 800m had been included at the 1928 Olympics but withdrawn in suspicious haste when the IOC deemed that the final had left finishers too distressed.

Nevertheless Neal coached Leather for the mile, prescribing hard intervals of 150m or 400m five times a week. The following year Leather broke the “world best time” with 5:02.6. Her achievement was labelled a “world best” rather than a world record by the IAAF as the distance was not officially recognised until 15 years later.

In 1954 Leather ran a fraction – one-fifth – of a second outside five minutes just a few days before her sub-five minute mile. After it she improved further with 4:50.8 and 4:45.0 in 1955, her career best. That remained the “world best” for seven years.

Leather won two European Championship silver medals at 800m: in 1954 behind the Soviet Union’s Nina Otkalenko in 2:09.8, and in 1958 behind another Soviet, Yelizaveta Yermolayeva, with 2:06.6.

Charles retired from athletics at the age of 27 and lived in Cornwall for the rest of her life during which she had four children and 13 grandchildren. She worked for child protection agencies and was married for more than 55 years – her husband predeceased her in 2017. She died on 5 September 2018, six months after Roger Bannister.