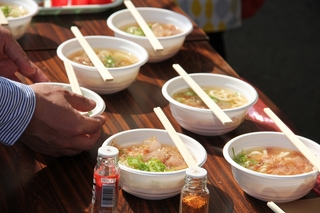 The Yoshino River, one of the three biggest in Japan, flows through the city of Tokushima and helps to sculpt the Marathon course.

The course runs easily along the banks of the river, setting out a comfortable and convenient route.

One of the reasons for the race’s popularity is that nature makes its presence felt close to the shore every year: yellow rape blossoms flow in the wind; the symbol of Tokushima city, Bizan, can be seen from everywhere along the course.

A unique aspect of the race is the chance to see authentic Awa Odori dancing. Various “Awa Odori Groups” showcase the dance with cheering to the sounds of drums, shamisen and whistle. At the aid stations along the course, the rich hometown culture is also in evidence with the warm udon served gaining great popularity among runners.

The race begins 09.00 with a second wave being set off at 09.10. Runners are given a generous seven-hour time limit in which to complete the course which starts out from the Tokushima Prefectural Government Offices and crosses over the Yoshinogawa Ohashi Bridge. Runners then proceed along the Yoshinogawa North Shore before passing back over the Shijo Ohashi Bridge and along the South Shore before finishing in the Tokushima Athletics Stadium.