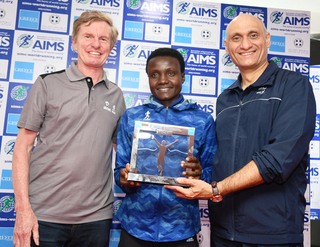 Joyciline Jepkosgei set a Half Marathon World Record of 1:04:51 at the Medio Maraton Valencia Trinidad Alfonso EDP on 22 October 2017. In setting the record, Joyciline broke her own record by one second.

Vivek Singh, Jt. MD, Procam International, promoters for the Airtel Delhi Half Marathon presented Joyciline with her award ahead of the race, held on 21 October, in which she finished a close second to a new Ethiopian talent Tsehay Gemechu.

It is the second time AIMS has presented an award to Joyciline. She received the AIMS World Record Award in 2017 in recognition of her Half Marathon World Record of 1:04:52 set in the Sportisimo Prague Half Marathon on 1 April 2017. Joyciline was presented that award in advance of the Medio Maraton Valencia Trinidad Alfonso EDP, the race in which she then broke her own record.