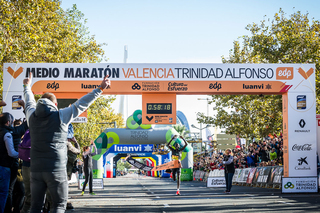 The City of Valencia is now home to all three world records at the half marathon distance (subject to ratification).

At the Medio Maratón de Valencia Trinidad Alfonso on Sunday (28 Oct) Abraham Kiptum broke the 8-year old record held by Eritrea’s Zersenay Tadese by five seconds, with a time of 58:18. In this same race the previous year his Kenyan compatriot Joyciline Jepkosgei improved her own world record for the half marathon by one second, to 1:04:51. Five months later Ethiopian Netsanet Gudeta broke the “women only” record (ie with no pacing by men) in the IAAF World Half Marathon Championships held in Valencia with 1:06:11.

The men’s leading group were paced through 5km in 13:56 and 10km in 28:02, but Kiptum soon eased up the pace by four or five seconds per kilometre. He reached 15km in 41:10, just seven seconds down on Tadese’s world record schedule, but Ethiopia’s Jemal Yimer and Abadi Hadis were only a couple of seconds down on him. Kiptum kept pushing, knowing the world record was within his reach, and passed 20km three seconds up on Tadese’s schedule and well clear of his pursuers.

His second 10km was run in 27:16 – 46 seconds faster than the first: “I realised the race had slowed down between the ninth and 10th kilometre so I decided to step up the pace and go for everything.” Of his immediate future Kiptum said he will race the Abu Dhabi Marathon on 7 December where: “I would like to reach halfway in 1:02:30 and finish under 2:05.” he said of his plans for that race.

Second-placed Jemal Yimer became third fastest ever over the distance.

In the women’s race United Arab Emirates’ Alia Mohamed Saeed, a late addition to the field, took hold of the race after 10km and thinned the lead group down to four, passing through 15km in 47:18. By 20km the race was a duel between Saeed and Ethiopia’s Gelete Burka. Burka kicked ahead with 800m to go to win by a couple of seconds.