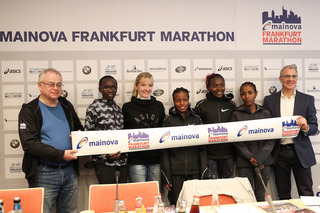 The Frankfurt Marathon this year is rich in running talent with 14 men who have broken 2:10 and ten women with personal bests of sub-2:25, making the latter field among the strongest in the event’s 37-year history.

Top of the women’s marathon charts on lifetime performances is the former World champion Mare Dibaba from Ethiopia, the first woman on the start line with a sub-2:20 to her credit, plus this year’s Paris champion Betsy Saina of Kenya among a group of women who should have the credentials to put the course record of 2:21:01 under pressure. The current course record was set by the Ethiopian Meselech Melkamu in 2012.

Among the contenders for the men’s title are two who have already stood on Frankfurt’s podium but without mounting the top step: Ethiopia’s Kelkile Gezahegn finished second in 2017 and Martin Kosgey of Kenya was runner-up the previous year. Another Kenyan, Wilson Chebet has a personal best to make any rival consider him a threat: his 2:05:27 makes him the fastest in the field. The leading German runners are national record holder Arne Gabius, who ran his best of 2:08:33 here three years ago, and the Frankfurt born and bred athlete Katharina Heinig.

This weekend more than 26,000 runners will be on the move in the Mainova Frankfurt Marathon including 13,800 taking part in the marathon. The event has IAAF Gold Label status, the highest category awarded for road racing by the world governing body of athletics. Frankfurt and Berlin are the only German races to be awarded this distinction.

“At top level we can look forward to high quality competition. Our women’s course record isn’t quite up to the standard of our men’s – 2:21:01 compared to 2:03:42 – and we want to help raise that standard. A long-term goal has been to help develop women’s running and not just among the elite. That’s why we are making renewed efforts to encourage women to run marathons,” said race director Jo Schindler at the pre-race press conference in Frankfurt’s Mövenpick Hotel.

Frankfurt will feature a contest between two runner-ups, setting Ethiopian Kelkile Gezahegn against the Kenyan Martin Kosgey. They finished second in Frankfurt in the previous two years. Gezahegn ran 2:06:56 in Frankfurt for second place last year and then improved to 2:05:56 for third place in Rotterdam in the spring. Kosgey ran his PB of 2:07:22 to finish second in the 2016 edition of the Mainova Frankfurt Marathon.

“I have prepared well for more than three months and I am planning for a fast time,“ explained Kelkile Gezahegn. “My aim is to bring myself in a position to be considered for Olympic selection. I want to run 2:04 on Sunday.“ While the 22 year-old Ethiopian said he plans to run the first half in 62:00 minutes, Elite Race Director Christoph Kopp intends to instruct the pacemakers for a slightly slower approach. “Our idea is to cover the first half in around 62:40. In Frankfurt we often had a faster second half, which is what we hope to see on Sunday as well,” said Kopp.

While Martin Kosgey plans to go with the first group so does Wilson Chebet. The three-time Amsterdam winner (2011 to 2013) has done some training runs together with Frankfurt’s course record holder and former world record holder Wilson Kipsang. “We talked about Frankfurt shortly before I travelled here and Wilson gave me some boost. He said Frankfurt is great for fast times and that the course is even faster than the one in Amsterdam. So my aim will be to improve my personal best,” said Wilson Chebet.

For the first time a strong Japanese elite team will compete in the Mainova Frankfurt Marathon. Hiroyuki Yamamoto (PB: 2:09:12 in Tokyo 2017), Akinobou Murasawa (2:09:43 in Tokyo 2018) und Tadashi Isshiki (2:09:47 in Tokyo 2018) hope to further improve on the fast course and their goal is of course to qualify for next year’s Olympic trial race in Japan.

A number of debutants from East Africa could cause a surprise on Sunday. Among them is Kenya’s Alex Kibet, who has run a world-class time of 59:06 in the half marathon this year in Ras Al Khaimah (UAE).

One thing is for sure: There will be a new champion of the Mainova Frankfurt Marathon crowned on Sunday. Late entry Mark Kiptoo did win the event back in 2014 and features a personal best of 2:06:00. However at the age of 42 he is no longer among the favourites. The Kenyan will chase a different goal in Frankfurt: He hopes to break the world master record. Fellow-Kenyan Kenneth Mungara established this mark two years ago in Milan with 2:08:38.

Germany’s Arne Gabius will return to the race, where he clocked sub 2:10 times on three occasions and broke the national record in 2015 with 2:08:33. The 37 year-old plans for 65:00 half marathon split time on Sunday. „A time between 2:09 and 2:11 should be possible for me. It would be disappointing to run 2:12 or slower,“ said Arne Gabius, whose long-term target is the Olympic marathon in 2020.

While the 2:21:01 course record could come under threat in the women’s race may be there is also a chance for a first sub 2:20 time in Frankfurt.

“The women’s course record should really come under the microscope this time,” said Elite Race Director Christoph Kopp. “We’ve done our best to put together a really strong women’s field. We hope this leads to a lot of personal bests and, to crown it all, a new course record,” is his ambition. Kopp plans to have two groups with pacemakers, targeting split times of 70:00 and 71:00 for the half marathon.

Four Ethiopian women are on the start list who have each run under 2:22 with one having cracked the 2:20 barrier: Mare Dibaba, who has twice run her best of 2:19:52. In 2015 victory crowned her World champion in Beijing before she took the bronze medal at the Olympics in Rio the next year.

Three of Dibaba’s compatriots are likely to be among her strongest rivals. Haftamnesh Tesfay made an impressive debut to her marathon career in Dubai this January with fifth place in 2:20:13. Two places behind Tesfay in Dubai came another Ethiopian debutant, Dera Dida and her impressive showing also makes her appearance in Frankfurt highly anticipated following her 2:21:45 in the United Arab Emirates. Meskerem Assefa finished third in 2:24:38 last year in Frankfurt. She made a solid improvement in winning the Nagoya title in mid-March, running 2:21:45.

Kenya’s Betsy Saina is expected to challenge the Ethiopians. She achieved a breakthrough performance in the marathon this April, winning in Paris with a fine 2:22:56. “My victory in Paris gave me a lot of confidence. The marathon is a special event, but I will try and take a certain risk. Since my race in Paris I know that the marathon is my event and in Frankfurt I want to improve my time,” said Betsy Saina.

Local hero Katharina Heinig carries national hopes on Sunday. A year ago she showed an excellent race finishing in eighth place. Her goal is to run exactly one second faster than last year. With 2:29:28 she would improve the German leading time of the year by one second.