Most successful AIMS Congress ever 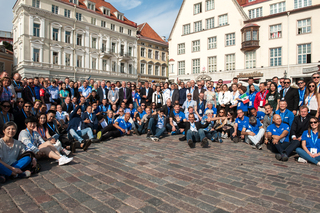 The 22nd World Congress of AIMS was held in Tallinn from 6–8 September 2018, coinciding with the 100th anniversary since Estonia’s independence was first declared.

Shirley Yang, AIMS PR Manager for China and representative of the Chinese Athletic Association (CAA), reported that in 2011 there were 22 Marathon races co-sponsored by the CAA. This reached 328 in 2016 and 1102 in 2017. Over 5 million runners competed in these events.

Makis Asimakopoulos, General Manager of the Athens Marathon – The Authentic, recounted the legend of the soldier messenger Pheidippides who ran from Marathon to Athens to deliver news of victory over the Persians at the Battle of Marathon in 490 BCE and sketched the evolution of the modern marathon represented through races around the world being part of AIMS, ‘the custodian of running through history’.

He explained the innovative collaboration between SEGAS (Hellenic Athletics Federation), The Athens Marathon – The Authentic and AIMS that brings Marathon history to life through the innovation of The Marathon Flame, lit each year at the tomb of Marathon, which travels around the world promoting the history and tradition of the marathon movement.

The head office of AIMS is based in Athens on Spyros Louis Avenue, the street named after the winner of the first Olympic Marathon event in Athens 1896. The annual AIMS Athens Symposium on running and the Best Marathon Runner Awards Gala (BMR) is shown live each year on the Greek State Television Channel (ERT), celebrating and recognising the sport’s top performers the greatest athletes and officials – ‘The Running Oscars’.

Andrew Horsewood, a Senior Analyst at Sportcal, world-leading providers of sports market intelligence, spoke to the Congress on ‘Evaluating the value of hosting sporting events’. He explained how sporting events should be evaluated in many ways – ‘of course volume of involvement and economic impact but also considering the wider social impact, sustainability and legacy’. Further: ‘the narrative is as important as the numbers’.

Sportcal have sought to create a Global Sports Impact (GSI) Project to look at a unified way to assess the impact of sport on the economy and also wider society. The GSI project has 10 ‘pillars’ or categories of impact: Economic; Tourism; Event Experience; Media; Social Media; Sponsorship; Sporting; Social; Sustainability; Legacy.

Are Altraja Founder and Co-owner of Sportland International Group spoke about ‘The value of the Tallinn Marathon to the city economy’. He argued: ‘everything starts with emotion and emotion creates culture and culture affects quality of life and the economy.’ He posed the question ‘how do you define value?’ Running events create a lifestyle and impacts upon health and wellbeing which positively affect culture and in turn the economy and the overall attraction of a city as somewhere to live and visit.

Stacey Conley spoke about ‘Making the Most of Marketing: Increasing Women’s Participation in Running Events’. She said that women are the fastest growing demographic in American running but that barriers still exist around the world. She urged organisers to increase receptiveness to increased female participation.

She praised several AIMS events such as the Nagoya Women’s Marathon in Japan awarded all 21,915 2018 finishers with a Tiffany necklace presented by men in black tie formal evening wear at the end of the race.

Ms. Conley stressed the importance of having women in key positions, especially marketing, and female role models who women can relate to and trust featuring in advertising in social media and all forms of communication.

George Kazantzopoulos, International Sustainability Expert & President of the ‘Institute Team for the World’ spoke about the importance of ‘writing the philosophy of building sustainability into the DNA of the event’. He talked about ‘sport’s power to influence society’s philosophy, values and behaviour’.

He collaborated with AIMS to create the AIMS Green Award and to produce the booklet titled ‘AIMS Green Guidelines to Run a Marathon event that respects and protects the environment’,all designed in line with the IOC Olympic Movement’s Agenda 21.

Michael Nishi, General Manager of the Bank of America Chicago Marathon Events gave a highly impressive presentation on scenario planning and implementation that the Chicago Marathon completes each year to give the best possible protection and service to its runners, spectators, staff and volunteers.

By organising big successful events, ‘we have to realise we are potential targets and we have a duty to make sure that our events are a target that is as difficult as possible for any bad guys to hit’. He stressed the importance of pre-planning, mitigating risk by scenario planning and then walking through each scenario before the event. One example is sending out a CPR (cardiopulmonary resuscitation) video to every runner, staff and volunteer. This has a positive health educational legacy lasting well beyond the event itself.

In the spirit of the AIMS Congress which aims to exchange expertise, information and experience, he referred to The National Center for Spectator Sports Safety and Security (NCS4) document ‘Marathon and Running Events Safety and security Best Practice Guide’, available at www.ncs4.com

Dr Troyanos cited a new study saying that heat stroke can be more than 10 times more ‘dangerous’ than heart attacks, although some experts disagree. He gave a great insight into the importance of decisions made by the medical director of a race including pre planning and analysis, monitoring of weather and the importance of early intervention for heat stroke patients. https://www.racemedicine.org

AIMS members also heard from a selection of their global sponsors including Chinese based company Health that has been developing innovative running shoes.

R-Bies in conjunction with AIMS have created a global window for races and runners to connect. Yutaka Sasai of R-bies talked about the success of races in Japan such as Nagoya Women’s Marathon attracting over 20,000 runners and the Tokyo Marathon having 30,000 runners but 350,000 applicants for those places. Mr Sasai emphasised that Japanese runners are looking for new experience, via the AIMS and http://runnetglobal.com partnership. Their database of over 2m Japanese runners is a gateway for millions of runners in Japan to visit races around the world. It is also an opportunity for millions of runners around the world to visit Japan.

AIMS photography partner Marathon Photos founder Francis Kay mentioned some innovative photography services for athletes and races. Marathon Photos have created a system to identify ‘bandit runners’ (runners who have not paid and faked a duplicate running number) and also created a system that pictures and profiles with general demographic data every running shoe make worn by every runner.

Martha Morales, Director of the AIMS Children’s Series, said that: ‘AIMS organises events around the world to help create opportunity and introduce young people to a healthy life style through the sport of running. To date AIMS Children’s Race Series has had over 50,000 runners. 30% of young people have come from orphanages around the world. The most recent events have been held in Ecuador, Iraq and India.

The next World Congress of AIMS will be hosted by the Great Batumi Night Race in Georgia from 23–26 April 2020.

The Congress elected the following people to the Board of Directors:

The Congress was broadcast live on YouTube, and the Speakers presentations will be available to AIMS members, Sponsors and Speakers on the members section of the AIMS website.