The resurgence of the Moscow Marathon, along with the instigation of new supporting events, has sparked a running boom in Russia. Dmitry Tarasov has spearheaded the team that brought it about 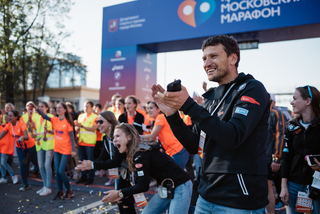 Sports-mad as a child he entered a soccer school at six but his playing career was curt short by injury at the age of 19. He had managed to combine his studies with his football career:

“I was lucky that, at this turning point of my life, there were people next to me who saw potential someone so young and inexperienced and gave me work. I worked with major brands like Nike and Reebok; I managed a street basketball charity project; I worked with professional basketball teams and even went to the Olympic Games in Beijing as a manager of the women’s team; I was responsible for sponsorship contracts in the Russian Football Premier League and managed sports events. Eventually, I decided to create a sports agency.”

In 2010 his agency was in the right place at the right time. Nike engaged them to develop a new treadmill programme:

“This was when the running movement in Moscow was beginning. We laid the groundwork for it: we opened cross-country clubs in parks and universities and created running events and, of course, tried to define the target audience. My experience and knowledge in sports marketing and contacts helped me later on to restart the marathon in Moscow.”

There had been some significant races in the city before but in the 1990s they had declined due to the deteriorating economic situation following the collapse of the Soviet Union:

“We wanted to reverse the situation by changing the concept, reaching a new level of organisation and attracting attention to races. Few people believed that it would work.

“There were many agencies in the country that managed sports events but there were none specialising in mass races. We took this niche. After a year’s work on the marathon ‘Luzhniki’ we proposed a new model: a large city marathon with preparatory races. Experience taught us that for the marathon to succeed it needs a series of supporting events so that people can test themselves at different distances and consistently prepare themselves for the Marathon.

“The Luzhniki Stadium management approved the idea and so too did the City authorities. In 2013 we launched a series of races from 5km to 21.1km that culminated with the Moscow Marathon in September.

“We managed to convince the city authorities that the new race needed a route through the centre of town and with a view of the main sights. For a long time no one had understood why streets should be blocked for the sake of a couple hundred runners. The former Moscow International Peace Marathon was run as four laps along the embankments. We promised that the new route would attract new participants, and it did: about 5000 people ran, a record number at that time. The city authorities saw the potential of the event from that first race and we have grown steadily: last year more than 20 000 people took part.

“By the sixth season, our team had gained experience in managing major events. We improved the sporting quality of the race and learned how to best cooperate with the city authorities; we created our own registration platform with a convenient payment system; we launched the system showing the results in real-time and provided a live broadcast on TV; we started working with an anti-doping agency; we set up our own volunteer program. We formed a team that has the in-house expertise to stage international competitions in Russia. Our employees go to big Marathons in other countries to learn how they do things.

“The heart of our race is the start-finish in the Luzhniki Stadium. This sports complex occupies a vast area with the capacity to handle 100,000 people. This summer it was one of the World Cup venues so there are all the necessary facilities in place for security and crowd control.

“After the World Cup many foreigners re-discovered Moscow: they saw a beautiful, modern and safe city with many people speaking foreign languages and interested in sport. As marathon organisers we do the same on a more modest scale. Race participants come from 70 countries: they run and admire the beauty of the city; they are surprised by the level of the organisation and return home full of enthusiasm. It is they themselves who attract new runners to our country.

“The number of foreigners in the marathon is growing thanks to cooperation with foreign media, participation in exhibitions and a bilingual website. But our proudest boast is that the marathon and its series of races has influenced the life of the city and the development of race events throughout the country. We are pleased to see other organisers improving their level of service because it raises the general standard. Nowadays Moscow’s parks and embankments are never empty: people are always running, either as individuals or with clubs. It inspires me to work more.

“Our team held a race in St. Petersburg on 5 August. Our debut SPB half marathon in ‘The Northern Capital’ immediately became the biggest mass half marathon in the city. The start and finish were in front of the Winter Palace, in which the Hermitage Museum is housed. The course was a single circuit passing along the central streets and embankments of the city, past world-famous architectural monuments such as Kazan Cathedral, the Peter and Paul Fortress, the Rostral Columns, the Admiralty and St. Isaac’s Cathedral.