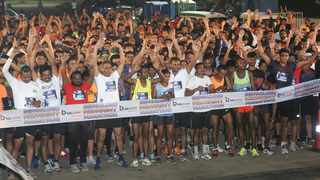 Bengaluru, formerly known as Bangalore, is India's most famous IT hub and one of India’s richest cities – but until little over a decade ago it did not have a marathon to its name. That changed when a group of Rotarians took the bull by the horns and established the Bengaluru Midnight Marathon in December 2007.

Bengaluru Midnight Marathon is popularly known as Bengaluru’s heritage run. It was one of the first consistent efforts to promote distance running year on year. Running as a sport was in its infancy in India when it started. Now Bengaluru is rated as the “running capital of India” with many running clubs which train and nurture the ordinary office-goer to take part in the many runs that are staged nowadays.

It was among the first marathons in the world to be run at night. It now attracts runners from 22 different states in India and many parts of the world, including elite runners from Ethiopia and Kenya.

The full marathon starts at midnight and some of the first-time marathoners will still be running at 06.00. It’s a tough race, since the participants are running against their biological clock, but conditions are pleasant and relatively cool (22ºC). The course is fairly flat and run over a 5.27 km loop. A very carnival-like atmosphere prevails with bands playing popular English and Hindi music, DJs belting out hit songs and local drummers adding to the festive atmosphere created to encourage runners as they come in on their loops. Their family, friends and colleagues clap and cheer, helping to pep up their running performance.

To promote distance running more effectively people are first encouraged to start with the family-friendly 5km Fun Run; for those already more practised there is the 10km. The turnout for both of these is 10,000–11,000 participants. Many have progressed over the years from the 10km to the half marathon. The Half Marathon attracts over 2000 entries and the Marathon itself around 500. BMM has emerged as the among the friendliest of marathons and many runners remember it as their first run or where they set their personal best timing. The race has a very loyal core following who have run every edition for the past 11 years.

Some years ago BMM launched an initiative to encourage athletes from the armed forces to compete shoulder-to-shoulder with elite athletes from East Africa. The idea was to break the myth of supremacy in distance running held by runners from East Africa. This move has paid rich dividends now with quite a few Indian athletes from the forces being victorious in the 10km and Half Marathon. Distance running in Bengaluru has come a long way since BMM started eleven years ago.